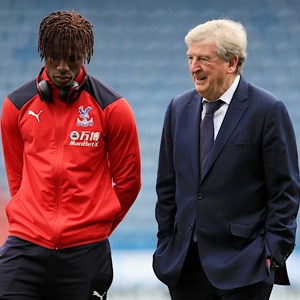 Cape Town - Crystal Palace manager Roy Hodgson has given fans an update on the reported interest in Wilfried Zaha, revealing that Arsenal have yet to match their asking price.

The Gunners have reportedly made Zaha one of their key targets for the summer transfer window, but they look to be miles apart on their valuations of the player.

The Daily Mirror reported last Thursday that the Gunners 'are refusing to give up on' Zaha and are contemplating offering up to three players in part-exchange in their next offer after their first bid invited fury at Selhurst Park.

The report added that Arsenal 'will get nowhere near' the £80 million Palace are demanding for the winger and now Hodgson has confirmed that the Gunners are a long way off.

"I don't think Arsenal have actually made a bid that has come anywhere near our valuation," Hodgson told Sky Sports.

"I'm sure the player realises that if someone's going to take him away from us, he'll expect clubs to pay the market value.

"Until someone does that, there's not much to discuss regarding Wilf."

We live in a world where facts and fiction get blurred
In times of uncertainty you need journalism you can trust. For only R75 per month, you have access to a world of in-depth analyses, investigative journalism, top opinions and a range of features. Journalism strengthens democracy. Invest in the future today.
Subscribe to News24
Related Links
Senegal star Mane out to press Ballon d'Or case
Baxter shares details of text messages from Mourinho, Wenger
Former Man City star Barton charged with actual bodily harm
Next on Sport24
Ferran Torres hat-trick sees Man City hold off Newcastle