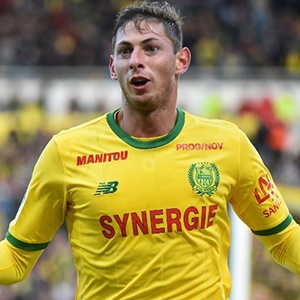 No further action will be taken against a man arrested on suspicion of manslaughter over the death of Argentine footballer Emiliano Sala, British police said on Wednesday.

Sala, 28, was killed when a plane carrying him and pilot David Ibbotson came down in the Channel on January 21 last year, just days after he had joined Cardiff City from French side Nantes.

In June last year Dorset Police arrested a 64-year-old man from North Yorkshire in northern England on suspicion of manslaughter by an unspecified unlawful act.

But Detective Inspector Simon Huxter said police "will not be seeking a formal charging decision... in relation to homicide offences".

The man arrested "will not be subject of further action with regard to that offence", he said in a statement, adding that a Civil Aviation Authority investigation continued.

Sala had been the then-Premier League side Cardiff's record signing after a fee of £15 million ($19 million, 17-million-euro) fee was agreed with Nantes.

The footballer travelled to the Welsh capital to complete the deal, then returned to northwest France to collect belongings and bid farewell to teammates.

His plane, piloted by Ibbotson, vanished from radar off the Channel island of Guernsey, as he returned to Cardiff to take part in his first training session.

His body was later recovered from the wreckage of the single-propeller Piper PA-46 Malibu plane as part of a private, crowd-funded search but Ibbotson's corpse has still not been found.

Since then, the two clubs have been involved in a legal wrangle over the transfer fee. Cardiff has also expressed dismay at reports the pilot was not licenced to fly at night.

Britain's Air Accidents Investigation Branch (AAIB) is due to publish its final report into the crash on Friday.

In August last year, the AAIB said Sala and Ibbotson - who were the only people on board the plane - were likely to have been exposed to "potentially fatal" levels of carbon monoxide.

Exposure at such levels "can reduce or inhibit a pilot's ability to fly an aircraft depending on the level of that exposure", it added.