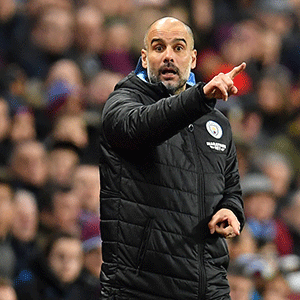 A sixth defeat of the campaign, at Tottenham on Sunday, means City have now lost as many times this season as in their previous 84 league games under Guardiola and are relying on cup competitions to salvage their season.

Guardiola's men are into a third consecutive League Cup final, where they will be heavy favourites to beat Aston Villa on March 1. They face Sheffield Wednesday in the fifth round of the FA Cup.

However, City's season will now be judged on how they fare in the Champions League, with the might of 13-time winners Real Madrid awaiting them in the last 16.

An inability to progress beyond the quarter-finals in Guardiola's three seasons at City so far has been the major disappointment of an otherwise hugely successful reign.

"I will be judged, if we don't win it in my final period here, that I will be a failure here. I know that," said the City boss ahead of this weekend.

If they are to be crowned European champions, City need major improvements at both ends of the pitch, but tightening up at the back is the most pressing priority.

In their back-to-back title winning campaigns, Guardiola's men conceded 27 goals in 2017/18 and 23 last season. With 13 games still to play this season, they have already conceded 29.

The loss of Aymeric Laporte for most of the season with a serious knee injury and failure to replace the departed Vincent Kompany has left Guardiola short on reliable centre-backs due to the erratic form of John Stones and Nicolas Otamendi.

Laporte is back fit, although he has been bedded in slowly after making his return in a 1-0 win at Sheffield United nearly two weeks ago.

The Frenchman still has another three weeks to get up to speed before City visit Madrid on February 26, but needs to get back close to his best if the visitors are to escape from the Bernabeu unscathed.

Guardiola also has to decide who he trusts to start at left-back against Madrid. Oleksandr Zinchenko cost his side the game at Tottenham by getting sent off for a second yellow card with half an hour to play.

Benjamin Mendy has not won back Guardiola's trust in another season dogged by fitness problems and poor form, while Angelino, who started some of City's biggest games of the season, against Liverpool and Manchester United, was shipped out on loan to Leipzig last week.

The 2-0 defeat in north London on Sunday was only the second time City have failed to score in the league this season.

They have still scored five more goals in the league than Liverpool, who are 22 points clear at the top and streaking towards the title.

However, a failure to take their chances has also been a recurring theme of City's season. Against Spurs they had 18 shots to Tottenham's three, missed a penalty and a series of other sitters.

"Always I believe and, today more than ever, you are closer to win the games when you create more chances and concede few," insisted Guardiola.

"Maybe one day we make a click and we change it. I think the team is good, I like the way my team play but it is not enough."

Guardiola has garnered a reputation as one of football's all-time great coaches after winning 28 trophies in three different countries with Barcelona, Bayern Munich and City.

A true test of that greatness will be whether he can turn the tide in the next few weeks to avoid City's season ending limply.

We live in a world where facts and fiction get blurred
In times of uncertainty you need journalism you can trust. For only R75 per month, you have access to a world of in-depth analyses, investigative journalism, top opinions and a range of features. Journalism strengthens democracy. Invest in the future today.
Subscribe to News24
Related Links
WRAP | English Premiership
Inter keeper Handanovic fractures finger
OPINION: Guardiola v Mourinho 'who's better' debate is closer than you think
Next on Sport24
Premier League changes would not 'kill the golden goose' says MP