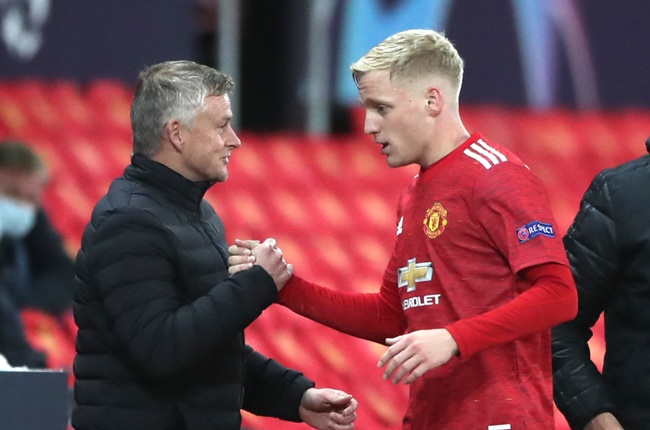 Donny van de Beek says he wants to be playing more at "nice team" Manchester United but has been told to be "patient" by Ole Gunnar Solskjaer.

The playmaker is yet to start a Premier League game for United following his summer transfer from Ajax despite impressing when he has been given the chance.

He scored his second goal in successive games for the Netherlands on Wednesday and fielded questions from the media after the victory over his lack of game time under Solskjaer.

"It sounds cliché for me to say this, because of course I would have liked to play more, but I really enjoy being in a nice team. I am simply received very well and helped by everyone," Van de Beek said as quoted by beinsport.

"I'm a patient person, but of course you go there to play as much as possible. I also think – in the minutes that I have made, in the times that I have come in – I have shown that I can add something to the team."

Van de Beek is confident he will soon get more chances at Old Trafford after revealing talks with Solskjaer.

He added: "What does he [Solskjaer] say to me? That I have to be patient, but also that I just have to continue with what I am doing.

"And that he's seen that I have a good impact when I come into the field. My time is definitely coming. And when those opportunities come, I have to be there."

We live in a world where facts and fiction get blurred
In times of uncertainty you need journalism you can trust. For only R75 per month, you have access to a world of in-depth analyses, investigative journalism, top opinions and a range of features. Journalism strengthens democracy. Invest in the future today.
Subscribe to News24
Related Links
Itumeleng Khune explains why he deserves Bafana Bafana call-up: 'Critics will always be there'
Makeshift Germany squeeze past Czech Republic in friendly
Maradona leaves hospital following surgery
Next on Sport24
Mount winner buys Lampard time at Chelsea