Emery lashes out at officials after defeat to Blades 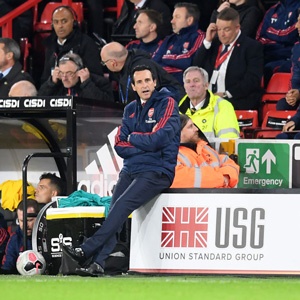 Cape Town - Arsenal boss Unai Emery expressed his frustration with the match officials after his charges were edged out 1-0 by Sheffield United on Monday.

The Gunners thought they should have had a penalty after six minutes when John Egan pulled Sokratis back by his shirt as the hosts defended a corner, but referee Mike Dean was unmoved, and VAR was not consulted.

And five minutes after Lys Mousset's goal which turned out to be the winner, Bukayo Saka was booked for simulation as he went down under a challenge - again from Egan - inside the penalty area.

Speaking to Sky Sports News after the match, Emery wondered why the incident involving Sokratis was not sent to VAR.

"(The penalty) is a very clear one with Sokratis, it's very clear," the manager said. "I don't know if the (Saka incident) was a penalty or not, no penalty? Perfect.

"I think a yellow card is very hard for that action, but I accepted that but when we are working with VAR, the penalty against Sokratis - this is for review.

"This is the action to review because it's clear. We need to accept it and continue."

"We did not deserve to lose, and we conceded a lot of corners in the first half and they scored in one action," the Spaniard said. "Above all, we have to improve by not allowing balls like that.

"When we have our opportunities to attack, we created more chances than them but did not score today. We deserved more from the game, but they have conceded the least goals in the Premier League and it was going to be difficult if they scored first.

"We tried in the second half, created three good chances to score."

Arsenal turn their attentions to Europa League action on Thursday, with the Gunners looking to make it three wins from three in the group stages.

We live in a world where facts and fiction get blurred
In times of uncertainty you need journalism you can trust. For only R75 per month, you have access to a world of in-depth analyses, investigative journalism, top opinions and a range of features. Journalism strengthens democracy. Invest in the future today.
Subscribe to News24
Related Links
Tanzanian star Samatta has sights set on Liverpool as Salah fights for fitness
8 key stats as Sheffield stun Arsenal
Rising Chelsea stars face acid test against youth kings Ajax
Next on Sport24
WRAP | Premier League