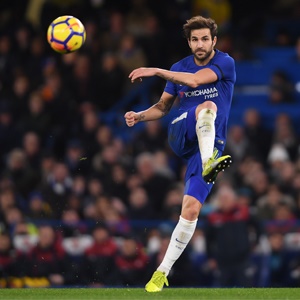 Fabregas left Arsenal to return to his home club Barcelona in 2011, but Mourinho was the man who brought the Spaniard back to England when he signed him for Chelsea in 2014.

The 31-year-old has spent significant portions of his career competing against Mourinho, for Arsenal against Chelsea, for Barcelona against Real Madrid, and now for Chelsea against Manchester United. However, he still looks back fondly on the time he spent under Mourinho at Stamford Bridge.

Fabregas will square off against the Portuguese tactician yet again on Saturday when Chelsea face United in the FA Cup final at Wembley Stadium.

Asked if he has an insight into Mourinho's tactics, Fabregas said at Cobham Training Ground: "No, especially in the last two years, we played many games against them and he has changed the system many times. I am sure he will change something again on Saturday.

"I love him. I always say that. I owe him a lot because he brought me here, I will always remember that. My first year here, Arsene [Wenger] had always treated me like a son, but the closest anyone has been to him was Jose. The way he treated me, the way he made me feel, how he let me be a leader of the team from day one.

"This was fantastic and in all the four years since I joined Chelsea, that will always stay with me. It [this experience] is thanks to him. Our history of what happened between us - I played for Arsenal and him at Chelsea, Barcelona and him with Real Madrid.

"We were confronting each other, but then we humbled ourselves and started a good relationship. This is very nice but hopefully it will not be his day and Chelsea can win.

"I was happy at Barcelona but there were players who were there for many years before me. For me, it was different because I went and came back and they paid money for me. It is more difficult, I never had the same love that the other players had. That’s also because they were such fantastic players, don’t get me wrong! When he brought me here, I had a lot of fire inside of me. It was a fantastic year [with him], to be honest."