Guardiola believes Aguero can return to his best form this season 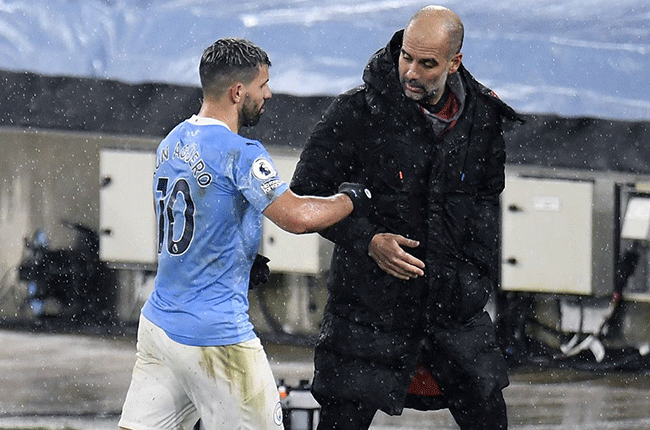 Manchester City manager Pep Guardiola feels there is still enough time left in the season for Sergio Aguero to get back to his best.

The 32-year-old's return had been complicated by further knee pain and a hamstring injury but he had been poised to return to the starting line-up for the first time since October in Sunday's FA Cup third-round victory over Birmingham.

That did not happen after the Argentinian was identified as a close contact of someone to have tested positive for Covid-19 and told to self-isolate for 10 days.

Aguero must now also miss Wednesday's Premier League clash against Brighton at the Etihad Stadium and probably Sunday's visit from Crystal Palace. Depending on when his quarantine began, he may also be unavailable for the Aston Villa game on 20 January.

It is another setback for Aguero, whose return was being carefully managed by Guardiola to gradually build-up match-fitness and avoid further injuries.

"He was in a good mood. He's now isolated, of course, and he's going to lose some training sessions and will need a little more time. Of course, he's a guy who needs training to be in his best condition, especially with his knee, and this is the only bad thing," said Guardiola.

"But the important news is that the last 10 or 15 days before being isolated he was perfect. He reacted good and this is the best news.

"At the end (of the day) we are (only) in January and the best part of the season is coming, and hopefully we can have him."

Aguero has at least avoided contracting coronavirus himself and has tested negative. City have had a number of other cases in recent weeks.

Two of those to have tested positive, Kyle Walker and Gabriel Jesus, returned to action as City saw off Championship Birmingham 3-0 in the FA Cup.

"I was really impressed with what they did, especially Kyle playing all 90 minutes, and Gabriel as well," said Guardiola.

"They came from Covid and sometimes some people struggle more than others, but they worked quite well and they are able to play."

Guardiola said of them: "Ferran and Tommy, they lost weight, they are a little bit skinnier, two or three kilos, but that's normal.

"Gabriel and Kyle were quite good. Every player who suffers this Covid is different. Sometimes it affects them less, sometimes more. The important thing is it passed and nothing wrong happened."

We live in a world where facts and fiction get blurred
In times of uncertainty you need journalism you can trust. For only R75 per month, you have access to a world of in-depth analyses, investigative journalism, top opinions and a range of features. Journalism strengthens democracy. Invest in the future today.
Subscribe to News24
Related Links
Pogba 'happy' when winning as Man United go top of the Premier League
Liverpool clash comes at perfect time for leaders Man Utd - Solskjaer
Pogba takes Man United top of Premier League with win at Burnley
Next on Sport24
West Ham would not sell Declan Rice even for £100m - David Moyes