Hiddink says he turned down Leicester London - Guus Hiddink says he turned down the opportunity to manage champions Leicester City following the dismissal of Claudio Ranieri and instead recommended Craig Shakespeare.

The experienced former Chelsea and Netherlands coach was in the frame to replace Ranieri after the Italian was sacked just nine months after leading Leicester to a shock Premier League title.

But the Dutchman, 70, told The Sunday Times: "To be strictly correct, I didn't talk directly with Leicester. But you know how the line goes. 'They think of you...'

"They asked not directly but indirectly, but I said no. If you have decided to sack Ranieri, why don't you go with your number two guy?"

Shakespeare was Ranieri's assistant and his permanent promotion last month to the top job has been a startling success, boasting a 100 percent record and hauling Leicester away from the relegation zone.

"Why don't you go there, you will see what will happen, I said. Happily I was right."

Shakespeare moved within touching distance of achieving his main goal of top-flight survival as the champions beat Stoke City 2-0 on Saturday.

We live in a world where facts and fiction get blurred
In times of uncertainty you need journalism you can trust. For only R75 per month, you have access to a world of in-depth analyses, investigative journalism, top opinions and a range of features. Journalism strengthens democracy. Invest in the future today.
Subscribe to News24
Related Links
Mosimane: That's the only way Chiefs can beat us
Title race back on says shocked Conte
WRAP: English Premiership
Next on Sport24
Klopp proud of Liverpool form amid Van Dijk absence 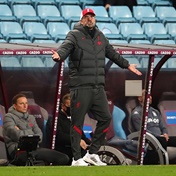