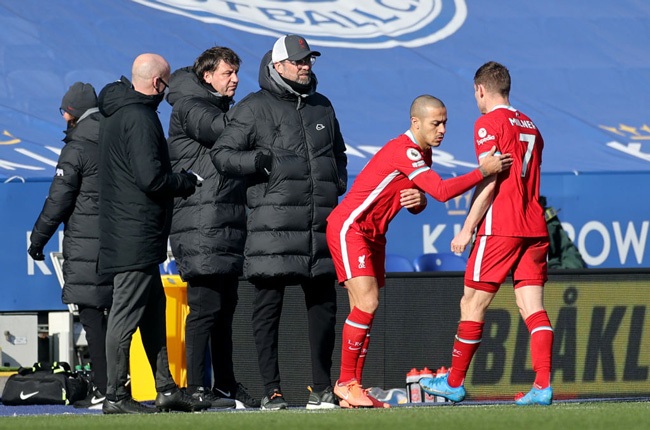 Former Premier League footballer Jermaine Jenas believes Thiago Alcantara is the player that is holding Liverpool back at the moment.

His comments come in the wake of the defending champions 3-1 defeat to Leicester on Saturday.

The Reds have now lost three Premier League games in a row for the first time since 2014 and Jurgen Klopp has already ceded the title with 14 games left to play.

Thiago was their big-name signing of the summer but has had a tough start to life in England amid the struggles of the team in general.

And Jenas believes the Spaniard is one of the major causes of their problems, with his lack of legs in midfield having a negative effect on the team.

"I don't think they've definitely got the legs in there now," said Jenas on Match of the Day.

"You know when you've got one link, either weak or missing in any chain, it breaks down.

"I think it was clear today (Saturday), when they're trying to play this high press, for me Thiago was a weak component without the ball for them.

"He was fine with it [at Bayern]. So, it's just within this system at the minute. Whether it's just the fact that his presses at Bayern Munich were at different times than they are at Liverpool.

"It just seems clear to me he's doing things he shouldn't be doing.

"I feel like he runs himself out of the game. He's going to press someone when there's three Leicester players around him, they've just popped it around him easily. If he holds his position, it's much more difficult.

"I feel like Thiago is late to the press, he's run himself out of play."

We live in a world where facts and fiction get blurred
In times of uncertainty you need journalism you can trust. For only R75 per month, you have access to a world of in-depth analyses, investigative journalism, top opinions and a range of features. Journalism strengthens democracy. Invest in the future today.
Subscribe to News24
Related Links
Mundele scores first Orlando Pirates goal in convincing win over Jwaneng Galaxy
Swallows extend unbeaten run in goalless draw against plucky AmaZulu
WRAP | PSL
Next on Sport24
Solskjaer's bizarre reason for Man Utd's Old Trafford woes