Manchester - Pep Guardiola is certain Gabriel Jesus and Sergio Aguero can play together for Manchester City despite suggesting it was a disaster when they first linked up.

Guardiola surprisingly started with the fit-again Aguero on the bench as City moved a step closer to Champions League qualification by beating Leicester 2-1 at Eastlands on Saturday.

Third-placed City are three points ahead of fifth-placed Arsenal with two games remaining as they battle for a top-four finish.

Jesus scored the penalty that put City two goals in front after David Silva had given them the lead with an effort that Leicester believed should have been disallowed for offside.

The Brazilian striker's arrival from Palmeiras in January has cast doubt over Aguero's long-term future at City, even though the Argentine has scored 31 goals this season.

The two forwards did start together for the 2-2 draw at Middlesbrough on April 30, but struggled initially before clicking, and they had 12 minutes alongside each other against Leicester after Aguero came on as a late substitute.

"They play at Middlesbrough together, and in the first half it was a disaster. The second half was much better. Both them have quality enough to see who wins the game for the side," Guardiola said.

"Gabriel can play on the left side if Aguero is in the middle. They can do that. In Brazil, Gabriel plays most of the time in the left.

"Of course they can play together. It depends on their behaviour and mood."

Jesus's penalty means he has scored twice in three matches since returning after two-and-a-half months out with a broken foot.

"We cannot forget that Gabriel was out injured for almost three months. It is still like he is in pre-season a little bit," Guardiola said.

"Gabriel is a guy who understands perfectly he has a lot of things to learn. He is open-minded, he will do it."

Guardiola's side made heavy weather of beating Leicester, with Shinji Okazaki's spectacular volley bringing the visitors back into the game just before half-time.

Craig Shakespeare's side looked set to equalise when Riyad Mahrez was tripped by Gael Clichy 15 minutes from the end, but the winger slipped as he scored the resulting penalty, touching the ball twice and causing the goal to be ruled out.

"In the second half, we didn't know whether to attack or defend. You have to understand how important the game was for everybody," Guardiola said.

"When you are in the middle of that, you are not sure if you defend or attack.

"But with the 10 minutes of injury time we had at the end, they defended quite well, so congratulations to the team. We are trying to finish the season well."

Leicester manager Shakespeare acknowledged the decision to rule out Mahrez's penalty was the right one.

However, he felt that City's first goal should not have stood, with Raheem Sterling swinging a leg at Silva's goal-bound shot, and missing it, while standing in an offside position.

"It is a freak penalty, a double touch. Clearly the letter of the law states it doesn't stand," Shakespeare said.

"What I will say in terms of the letter of the law an eagle eyed official probably notices the encroachment of two Manchester City players but you don't often get that these days.

"Maybe he can pull it back but in real time it happens really quickly.

"For the first goal, I felt Sterling made an effort for the ball but I wasn't sure if he is in an offside position.

"Having seen the replay, I can see he is in an offside position. It is a clear offside decision." 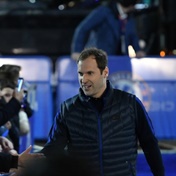