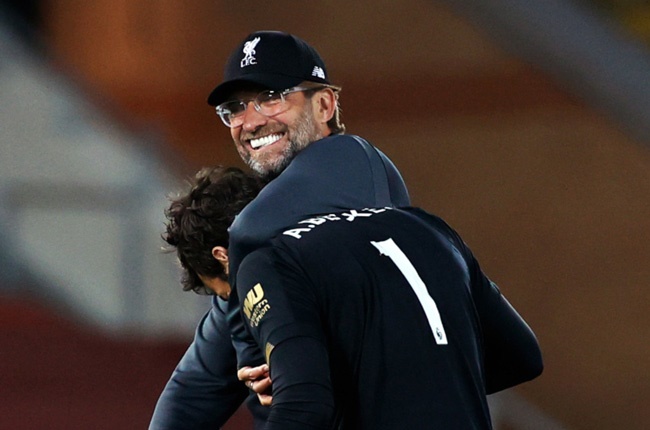 Liverpool are within touching distance of the title after their 4-0 win over Crystal Palace. In fact, they may not even need to kick a ball again to be confirmed as champions, if Manchester City fail to beat Chelsea.

Klopp's coaching style is largely based on a counter-pressing style, so he was visibly delighted at how well his team carried out his orders upon their return to Anfield.

No fans were present to witness it, and that was the only downside for Klopp, as he dreamed of what it would have been like with everyone there.

"Imagine if this stadium would have been full today and all the people could have experienced it live," Klopp told Sky Sports.

"My boys played like everyone was in the stadium. The atmosphere on the pitch was incredible.

"It was for sure the best counter-pressing game I have ever seen behind closed doors.

"(Before the restart) I said I would like to see the best games behind closed doors ever because, hopefully, we won't have to see them again.

"That was the best counter-pressing game I have ever seen. Palace didn't change their approach, but we felt free.

"We tried hard to tell the boys how good the Everton game was apart from the last third. Today was a reaction and I liked the game so much.

"4-0 up in the 87th minute and four players chasing one Crystal Palace player like it's the only ball in the world, I like it so much, wonderful result and a wonderful game.

"The boys are in good shape and in a good mood and it was important we showed our supporters we are still here, and we do not want to wait."

With Liverpool potentially winning the title as early as Thursday, Klopp denied claims from Pep Guardiola that Manchester City would be focusing on the FA Cup.

"They are brilliant," Klopp added. "Pep should play poker and the football they play is unbelievable.

"We are different, and we have to be, but we are good as well. There are different ways of playing football and I like them both."

We live in a world where facts and fiction get blurred
In times of uncertainty you need journalism you can trust. For only R75 per month, you have access to a world of in-depth analyses, investigative journalism, top opinions and a range of features. Journalism strengthens democracy. Invest in the future today.
Subscribe to News24
Related Links
Frank Lampard questions Raheem Sterling comparison on chances for black managers
Ole Gunnar Solskjaer: We can still improve in front of goal
Frank Lampard: No bids have gone in for 'top player' Kai Havertz
Next on Sport24
Lampard insists Olivier Giroud has part to play in his Chelsea plans