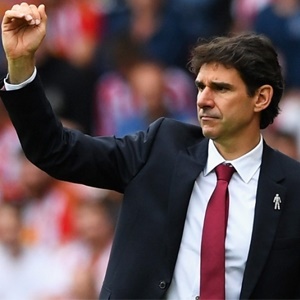 Mourinho and Guardiola both took the reins at their respective clubs at the start of the season and Karanka believes the Red Devils made the better choice.

Karanka's Middlesbrough faces Man City in the FA Cup quarter-finals and during his pre-match press conference, the Spaniard spoke highly of the former Chelsea boss.

"He has shown it at Porto, at Inter Milan, Chelsea and Real Madrid and Manchester United. He was the best [in La Liga] and he still is the best.

"I've never worked with Pep, but Jose started this season with some criticism, but he has already won two trophies for Man United.

"Jose is the best for me. I think Pep has to win the Premier League to prove [he is one of the best]. I think he has to win a trophy [this season]."

Karanka, who was Mourinho's assistant during their time at Real Madrid, believes Guardiola will take time to adjust to life in the Premier League, while his former boss has plenty of experience managing in England.

"I think he's [Guardiola] realised that this is a different football, a different league, and he has grasped how difficult the challenge is. It's taking him time to adapt and it's not been easy for him," he said.

"It's difficult when you arrive in a new country, with a new philosophy where a lot of things are different.

"He has some very good players, but the mentality here is different. Things are different and it takes time to adjust."

We live in a world where facts and fiction get blurred
In times of uncertainty you need journalism you can trust. For only R75 per month, you have access to a world of in-depth analyses, investigative journalism, top opinions and a range of features. Journalism strengthens democracy. Invest in the future today.
Subscribe to News24
Related Links
Vieira impressed by improving MLS
PSG boss gets 'full support' despite Barca horror show
Klopp keen to avoid familiar trap against Burnley
Next on Sport24
Ancelotti slams 'joke' red card as Saints end Everton's unbeaten start