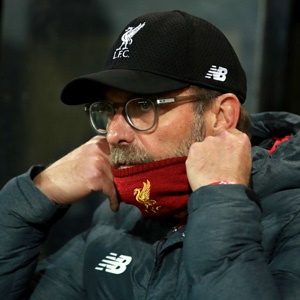 Liverpool manager Jurgen Klopp admits the news that Kenny Dalglish tested positive for the coronavirus was a shock.

The 69-year-old former Reds player and manager was admitted to hospital on Wednesday for treatment on gallstones and subsequently tested positive for Covid-19 despite not showing symptoms.

He has since returned home and remains asymptomatic, but Klopp revealed the news was a concern for everyone connected with the club.

"It was a real shock three days ago when I heard about it first. The boys were sent a message in our WhatsApp group and everybody was like, 'Wow'," Klopp told the Liverpool website.

"What you feel in that moment is a massive difference if you know somebody who got the virus, or if you don’t know.

"In this moment, it was like, 'wow, one of us has it' and it was really crazy.

"We all know this terrible disease is causing heartache all over the world but this was the first time for many of us someone we have such a personal connection to was affected to this extent.

"I had the opportunity to text immediately with one of his daughters and we spoke about it. She was quite, not relaxed, but she was fine and said it looked all well and two days later we heard he was released from hospital.

"It's good news, very good news and I hope he is doing well still.

"We all know Kenny and we love him. We just sent him all our thoughts and prayers in that moment, but maybe he didn’t need it, which is even better."

We live in a world where facts and fiction get blurred
In times of uncertainty you need journalism you can trust. For only R75 per month, you have access to a world of in-depth analyses, investigative journalism, top opinions and a range of features. Journalism strengthens democracy. Invest in the future today.
Subscribe to News24
Related Links
Shitolo prays his return to Pirates goes well
AmaZulu rule out player departures
Atletico could sell Lemar as United eye a move
Next on Sport24
Solskjaer: I'd have backed Fernandes with my mortgage