Koeman adamant he can turn Everton's season around

Liverpool - Ronald Koeman insisted he could still arrest Everton's alarming slump down the Premier League table even as he picked through the wreckage of Arsenal's 5-2 win at Goodison Park on Sunday.

The Dutch manager saw the Merseyside club drop into the bottom three of the Premier League following an astonishing game which saw Arsene Wenger's side boast five different goalscorers.

But Koeman remained defiant despite a worrying start to the season that has seen Everton score just seven goals in their opening nine league fixtures and effectively exit the Europa League group after collecting one point from their opening three games.

"It's how you look at the situation," said Koeman. "If you start to think negatively then maybe there is no solution. I'm not like that.

"But okay, once again, there are all the rumours (about my position), all the newspapers but that's normal."

The Dutch boss added: "The team is under-performing, the team is in a difficult situation mentally, with confidence. They are struggling.

"That's what we need to change and I personally believe that I can change the whole situation but everybody knows how it works in football. The decision is not in my hands but I don't think it is too late."

Koeman's relationship with chairman Bill Kenwright and majority shareholder Farhad Moshiri reportedly remains strong and the manager was awaiting the normal post-match conversation he has with them following every fixture.

And the performance, which actually saw Everton take the lead through Wayne Rooney, did seem to suggest that the players are still playing for their beleaguered manager.

"That's the feeling I have," said Koeman. "But I don't know. For every manager working with 28-29 players, you can't keep everybody happy. That's my opinion but I don't know."

Koeman also suggested Everton's poor start was down to a tough fixture list.

"We have played nine games, and played the top five from the Premier League last season but this is not a position in the table that's good for Everton," he said.

"It's not a time to start to be crazy. I'm responsible for this team. We lost 5-2 today which is a big result, even against a team like Arsenal, and we will see what happens."

In the meantime, assuming he is still in charge when Everton visit Chelsea in the League Cup on Wednesday, Koeman's only aim is to reduce the air of negativity that understandably shrouds his club at the moment.

"I told the players I believe in the players and their commitment," said Koeman. "But if you're thinking negatively, and everybody is doing that at this moment, I can understand that."

Nacho Montreal cancelled out Rooney's opening goal before Mesut Ozil put Arsenal ahead and Everton's Idrissa Gueye was sent off for a second bookable offence.

Alexandre Lacazette and Aaron Ramsey made it 4-1 and, in a bizarre spell in stoppage time, Oumar Niasse charged down Petr Cech's clearance for Everton's second goal and Alexis Sanchez wrapped up the scoring.

It was the first time the trio of Lacazette, Ozil and Sanchez had started the same game for Arsenal and Wenger was hopeful of seeing more of the same in future.

"Sanchez was on fire," said Wenger. "I believe since he came back from injury he has worked very hard.

"Ozil as well. The two of them are very sharp. They were very mobile and showed their individual quality. It is what makes them dangerous against any defender."

The Frenchman added: "Ozil was superb. Agile, quick, intelligent. He was always at the service of the team with the intelligence of his passing. When he is at that level he is an exceptional football player." 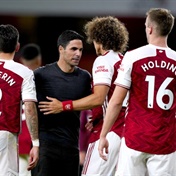