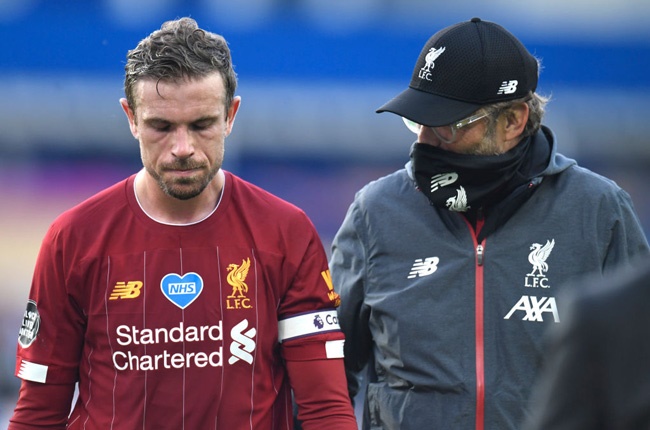 Despite having 70 percent possession at Goodison Park on Sunday, the champions-elect managed just three shots on target, the same number as Everton, on their return to action after three months' absence.

Carlo Ancelotti's team became just the third side this season to take points off Liverpool, who have won 27 of their 30 games.

Klopp knows he cannot expect too much, too soon after the coronavirus pandemic-enforced break.

"I liked the intensity level of the game from my boys, the high press, but I didn't like too much the rhythm -- but we cannot force that," he said.

The draw with Everton means Liverpool cannot now win the title at home to Crystal Palace on Wednesday unless Manchester City, 23 points behind, drop points against Burnley on Monday.

"I saw four weeks (of) training sessions and I was happy," said Klopp, who left forward Mohamed Salah on the bench.

"It was just a difficult game. Physically, we were ready, which was important.

"The defensive stuff was there, I liked offensively but you need moments. If you score in a moment it can change a situation."

Liverpool lost two players to injury during the match but Klopp hopes both James Milner and Joel Matip will not be sidelined for long.

Everton could have snatched a rare victory late on had Reds goalkeeper Alisson Becker not denied Dominic Calvert-Lewin's backheel, before Tom Davies hit the post with the follow-up.

We live in a world where facts and fiction get blurred
In times of uncertainty you need journalism you can trust. For only R75 per month, you have access to a world of in-depth analyses, investigative journalism, top opinions and a range of features. Journalism strengthens democracy. Invest in the future today.
Subscribe to News24
Related Links
Arsenal player tests positive for coronavirus
Former Manchester United midfielder: Why are there not many black managers?
Liverpool look for Manchester City favours after derby deadlock
Next on Sport24
Premier League changes would not 'kill the golden goose' says MP