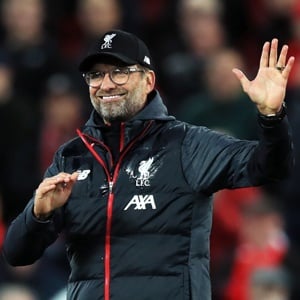 Cape Town - Jurgen Klopp's undefeated Liverpool side are on track to smash various records on the way to a likely historic Premier League title.

After Liverpool's dominant display against rivals Manchester United in a comfortable 2-0 win at Anfield at the weekend, Klopp's side remains on track to record a historic title run on the way to their first Premier League title in 30 years.

At the time of writing, Liverpool have played 22 matches, winning 21 with one draw to remain on track to match Arsene Wenger's legendary 'Invincibles' side who went the entire 2003/04 season without tasting defeat.

To put Liverpool's current form into context, the Invincibles finished the 2003/04 season on 90 points and although they remained undefeated, recorded 12 draws.

Liverpool's current points projection - with an impressive points-per-game ratio of 2.90 - could see them lift the title on a record-smashing 110 points.

Here are all the records that Liverpool are likely to/have set on their way to the 2019/20 Premier League title:

- Best ever start to a Premier League campaign: 61 points from 21 games.

(The 1-0 win over Tottenham saw the Reds surpass Manchester City's record of 59 points set during their title-winning 2017/18 season.)

- Biggest points margin at this stage of the season 16.

(Their lead of 16 points after 22 games after the win over Manchester United saw Liverpool equal Jose Mourinho's Chelsea side during the 2005/06 season.)