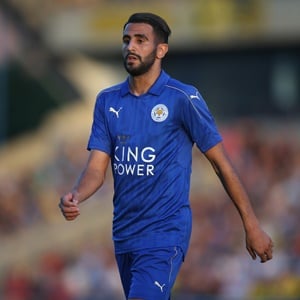 The playmaker has long been a target for a number of top European clubs including Barcelona, Chelsea, Manchester United and Arsenal while Roma have had three bids rejected for the 26-year-old.

Mahrez was in Algeria preparing for his country's World Cup qualifying matches against Zambia on Saturday and Tuesday, but was allowed to leave, with the transfer window closing on Thursday.

A statement from the Algerian Football Federation read: "Leicester City's Algerian international Riyad Mahrez, who is currently with the national team in Sidi Moussa to prepare for the double confrontation against Zambia for the 2018 World Cup qualifiers, was authorised by the national coach Lucas Alcaraz and the Algerian Football Federation to make an express trip to Europe to formalise on Thursday his transfer to his new club.

"The national team will fly without him on Thursday morning to Lusaka to face Zambia on Saturday."

We live in a world where facts and fiction get blurred
In times of uncertainty you need journalism you can trust. For only R75 per month, you have access to a world of in-depth analyses, investigative journalism, top opinions and a range of features. Journalism strengthens democracy. Invest in the future today.
Subscribe to News24
Related Links
Snodgrass explains Hammers exit
Spurs sign Argentine starlet Foyth
Giroud felt 'ashamed' after defeat to Liverpool
Next on Sport24
Klopp accuses Premier League chiefs of 'ignoring player welfare' over subs rule