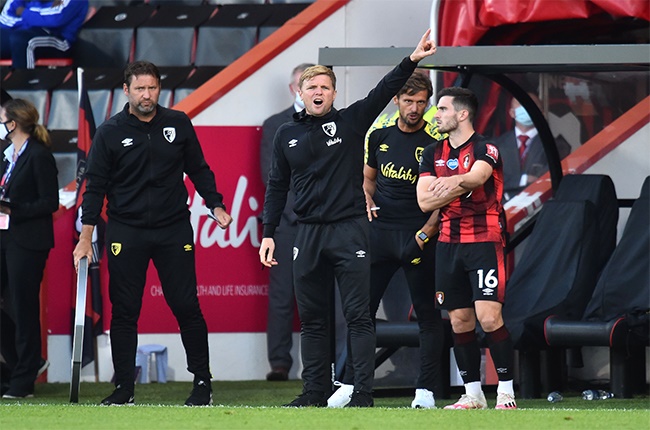 Eddie Howe, Manager of AFC Bournemouth gives his team instructions during the Premier League match between AFC Bournemouth and Leicester City at Vitality Stadium on July 12, 2020 in Bournemouth, England. Football Stadiums around Europe remain empty due to the Coronavirus Pandemic as Government social distancing laws prohibit fans inside venues resulting in all fixtures being played behind closed doors.
Glyn Kirk

The 45-year-old former Cherries midfielder is on the club's list to replace Eddie Howe, the PA news agency understands.

Bournemouth, who were relegated from the Premier League last week, are aiming for a swift appointment with next season's Sky Bet Championship campaign starting on 12 September.

Current caretaker Jason Tindall is also in the running with the club seriously considering an internal appointment.

But, if they opt to look externally, Bournemouth are tempted to lure Robinson back to the club where he enjoyed a successful six-year spell as a player.

He made 288 appearances, scoring 62 goals, for Bournemouth before joining Preston in 2000.

Speaking after Motherwell's 1-0 defeat at Ross County on Monday night, Robinson said: "My sole focus is on Motherwell. I can't control what people write."

Former Northern Ireland international Robinson has impressed on a tight budget at Fir Park and has guided Motherwell into the Europa League after finishing third last season.

He was a candidate for the Northern Ireland job earlier this season before Ian Baraclough was confirmed as Michael O'Neill's successor in June.

The former Oldham boss has won 66 of his 146 games in charge after being appointed Mark McGhee's replacement in March 2017. Motherwell face Ross County in their opening SPL game of the season on Monday.

The Cherries are looking for a new manager after Howe left by mutual consent on Saturday following two spells spanning more than a decade.

Bournemouth's five-year stay in the top flight ended despite a 3-1 win at Everton on the final day of the season.

The new boss is likely to face a challenge to keep the Cherries' star men with Aaron Ramsdale, Callum Wilson and Josh King already linked with moves away.