No Vardy, no party as Boro hold Leicester 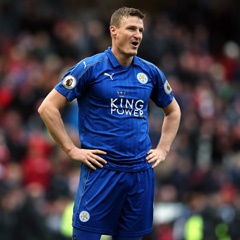 Middlesbrough - Leicester City's underwhelming season continued on Monday as they were held to a 0-0 draw at Middlesbrough that did little for either side's hopes of avoiding Premier League relegation.

With Jamie Vardy completing his three-game suspension and Riyad Mahrez again disappointing, Leicester lacked a cutting edge and it was Boro who came closest to taking all three points at the Riverside Stadium.

The result inched both sides a point further clear of the bottom three, but the threat of relegation will continue to stalk them when they return to league action after next weekend's FA Cup third-round fixtures.

Champions Leicester have now gone 12 away games without victory in the Premier League, stretching back to the 2-0 win at Sunderland last April that nudged them closer to their fairytale title win.

With both teams having played on New Year's Eve -- Leicester edging West Ham United 1-0, Boro cruelly beaten 2-1 at Manchester United -- they each made five changes to their starting XIs.

Leicester, for whom Islam Slimani was absent with a fever, made the more lively start.

Shinji Okazaki could not make anything of Leonardo Ulloa's knock-down from Mahrez's free-kick, while Christian Fuchs drilled wide from the edge of the box.

But as the game wore on, Boro began to take control, with Adama Traore to the fore.

The former Barcelona winger had a penalty shout turned down in the 18th minute when he appeared to be impeded by Robert Huth right on the edge of the Leicester box.

Moments later the 20-year-old sped to the byline on the right and cut the ball back for Marten de Roon, who shot over.

Antonio Barragan returned from suspension for Boro, but he limped off clutching his hamstring in the 34th minute, with George Friend coming on.

Left-back Friend emerged as an improbable most likely source of a goal in the second half.

He warmed Kasper Schmeichel's palms from 25 yards and then cut in from the right, only to skew his shot wide.

He also curled an inviting cross into the box from the left, but Adam Forshaw could not make telling contact.

All Leicester mustered in response was an Ulloa header that Brad Guzan saved comfortably.

Visiting manager Claudio Ranieri took decisive action by sending on Ahmed Musa in place of Mahrez, who produced another low-key display in his last game before departing for the Africa Cup of Nations with Algeria.

But it was Boro who continued to push, Gaston Ramirez squandering a golden chance to snatch victory when he lashed wide following a tame clearance by Wes Morgan.

We live in a world where facts and fiction get blurred
In times of uncertainty you need journalism you can trust. For only R75 per month, you have access to a world of in-depth analyses, investigative journalism, top opinions and a range of features. Journalism strengthens democracy. Invest in the future today.
Subscribe to News24
Related Links
I've shut the critics up, says Ibrahimovic
Sundowns receive opening bid for Dolly
Record signing Oscar lands in Shanghai
Next on Sport24
Wolves shake off Jimenez loss to beat Arsenal