London - Arsenal's title challenge is back on track following a 2-0 victory over Bournemouth on Monday which sent them to the top of the Premier League and saw goalkeeper Petr Cech set a new clean-sheet record.

Goals from Gabriel and Mesut Ozil, who was again Arsenal's key performer, were enough for the Gunners to settle a few nerves following a shock 4-0 defeat at Southampton two days earlier.

The victory also marked an important landmark for Cech who kept his 170th clean sheet in the Premier League - most of them in Chelsea colours - to overtake the previous mark set by David James.

With former leaders Leicester due to play fourth-placed Manchester City 24 hours after this fixture, the result leaves Arsenal one point clear at the top of the table -- and goes some way to answering criticism that Arsene Wenger's side were starting to buckle under the pressure of trying to win the title for the first time since 2004.

If you took only history into account then this fixture would be one of the most uneven the Premier League has ever seen -- mighty Arsenal, 13-time champions, 12-time FA Cup winners and perennial Champions League participants against a club that was playing in the fourth tier of English football only 12 years ago.

But there's a lot more to English football than that and there was not a huge chasm between the teams as Arsenal ground out a crucial three points.

Bournemouth, renowned for their attractive style of play, went into the game having not lost since early November, including morale-boosting victories over Chelsea and Manchester United.

Arsenal by contrast had seen their own six-match unbeaten run brutally ended by Southampton in defeat at St Mary's, a result which almost instantly deflated the euphoria which had been building in north London.

Perhaps that is why the atmosphere at the Emirates was so muted at the start of a match that Wenger's side simply could not afford to lose.

Gabriel's header from an Ozil corner after 27 minutes, however, soon settled those nerves.

Set-pieces have been Bournemouth's Achilles heel all season and the Brazilian defender was totally unmarked as he stooped to head home at the far post.

Gabriel, in fact, was one of four players brought into the Arsenal side by Wenger following that miserable evening on the south coast, with Alex Oxlade-Chamberlain, Calum Chambers and Kieran Gibbs also selected in a rare shake-up -- and Lauren Koscielny surprisingly left on the bench.

Gabriel justified that faith as he hit the post with another header from another Ozil corner minutes later, the ball bouncing back off the upright onto Per Mertesacker and dropping wide.

Gabriel was also outstanding in defence and the game was effectively over when the mercurial Ozil played a delightful one-two with Olivier Giroud before accepting the Frenchman's back-heeled pass and sliding the ball home in the 63rd minute.

Arsenal, who missed a string of chances to add to their lead, now face struggling Newcastle at home next weekend before potentially more difficult fixtures against Liverpool, Stoke and Chelsea. 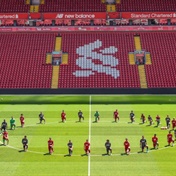