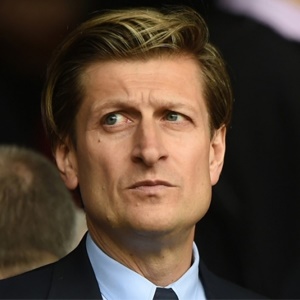 Crystal Palace chairman Steve Parish has argued the return of Premier League football could boost the mental health of the nation and help define the "new normal" for other industries.

Parish defended attempts to get the season back up and running amid the coronavirus pandemic, stressing not doing so would be a major financial blow to taxpayers and the wider football community.

The Premier League met on Friday to discuss 'Project Restart' with clubs committed to finishing the season when some social restrictions are relaxed. It is understood the league is still working towards a best-case scenario of play being able to resume from the week beginning 8 June.

Parish wrote in his column in The Sunday Times that he would respect if the nation decided that it was inappropriate for football to return, but he argued that it would help no-one if football or any industry "come out the other side in a worse state than we otherwise could have".

Parish said: "Football cannot occupy any paramedic or ambulance that the NHS needs. We must do our best not to create a public-order issue with supporters attempting to get close to grounds. Perhaps most importantly, we cannot take testing capacity from one person in greater need."

But he added: "I believe that just as Formula One is often the precursor to developments that become standard in general road vehicles, so Premier League football with its physical science, medical infrastructures and resources for looking after its people, can begin to define how the 'new normal' might look for a lot of working environments.

"Not only that, in our country and beyond, people need to find ways to move forward mentally, to experience some small relief from the worries of this crisis. In my view, a story here and a conversation there about the game last night will not trivialise loss or suffering but offer a tiny respite from it for many people. Football is meaningless - but it is magnificently meaningless. It has the power to lighten lives; why not see if we can use that power again?"

We live in a world where facts and fiction get blurred
In times of uncertainty you need journalism you can trust. For 14 free days, you can have access to a world of in-depth analyses, investigative journalism, top opinions and a range of features. Journalism strengthens democracy. Invest in the future today. Thereafter you will be billed R75 per month. You can cancel anytime and if you cancel within 14 days you won't be billed.
Subscribe to News24
Related Links
Lloris wants Premier League title settled on the pitch
Bruno Fernandes: 'I will be the biggest enemy they can have'
Evra says his childhood prepared him for football
Next on Sport24
Tuchel tells Chelsea to prepare for 'rebuilding' to keep up with rivals