This weekend's matchday 35 Premier League fixtures dished up 10 entertaining matches from Saturday through to Monday.

In a Sport24 feature, Tashreeq Vardien awards gold, silver and bronze medals based on player performance.

David Moyes is a man on a mission to keep the Hammers’ Premier League status intact as the London side romped Norwich City 4-0 at Carrow Road.

Michail Antonio has been in scintillating form and it showed again this past weekend as he netted four goals.

The 30-year-old was positioned in the right places at the perfect time which proved to be pivotal for West Ham as three of his four goals happened in the six-yard box.

The other strike was courtesy of captain Mark Noble's lobbed cross in which Antonio's effort was stopped by goalkeeper Tim Krul. However, the ball took flight as it was blocked to allow Antonio to easily head it into the back of the net. Watch it here.

It seems as if he has been Manchester City's go-to man when star striker Sergio Aguero is not in the flurry of goals or nursing an injury.

Raheem Sterling netted a hat-trick at the weekend as the Premier League's runners up thumped Brighton 5-0 at the Amex Stadium.

The arrival of Pep Guardiola in 2016 has also benefitted the England international as he his stock has risen tremendously under the Spaniard’s tutelage.

Sterling opened the scoring with a superb placed strike before perfectly placing himself in the six-yard box to head home a second goal.

To complete the hat-trick, Sterling created his own luck as he weaved his way into six-yard box before he clashed with a Brighton defender as the ball fatefully hit his head and rolled over the goalline. Watch it here.

The surprise of the weekend came from Dominic Solanke as he ended his goal drought with a brace against a top four chasing Leicester City.

The former Liverpool man capped his first goal in top-flight football as Bournemouth, who also fighting for Premier League survival, shocked the Foxes with 4-1 win.

Solanke's first goal was a silky finish from the left flank as he cut into the penalty with a well-placed strike.

Thanks to a well-worked team effort, the Cherries' offensive press saw Leicester buckle under pressure and lose the ball. Solanke then latched onto the loose ball and finished it off through the legs of goalkeeper Kasper Schmeichel. Watch it here. 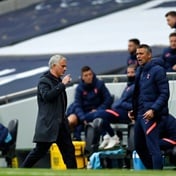