'Rice reminds me a bit of myself' - Jamie Carragher 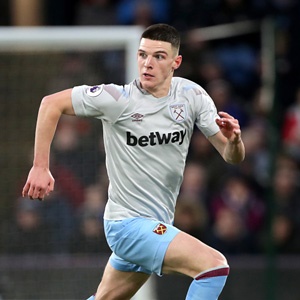 Rice has established himself as one of the Premier League's better young players at West Ham, making his senior debut in May 2017 as a midfielder and recently establishing himself in defence.

Carragher sees plenty of his own development at Liverpool in the England international, who he feels would be "perfect" in a back three.

Rice has been linked with Manchester United and even Chelsea, who released him as a 14-year-old, and Carragher is a fan.

"He reminds me a bit of myself," he told Sky Sports News. "I started in midfield and went back to centre-back.

"I'm a big fan of Declan Rice because he’s come in and had people say he's great over different stages. Then this season he’s struggled a bit.

"That happens to every player, everyone's talking about you, then you have a bit of criticism. I think he's got a bit of character; he never hides, he's playing in central midfield as a young lad. I think he's better on the ball than he’s given credit for.

"There's a slight criticism in terms of how he receives the ball. There is an art to that. But when he gets on the ball, he gets his head up, he's looking forward.

"He's got something about him. At centre-back he won't have those problems, everything's in front of him. that's why I was never going to be a top-class central midfield player at Liverpool; I was never quick enough with the ball at my feet.

"In terms of stepping out with the ball, I think he'd be perfect in a back three. I'd have no qualms about him going into midfield. But at his age, every player’s got to improve."

We live in a world where facts and fiction get blurred
In times of uncertainty you need journalism you can trust. For only R75 per month, you have access to a world of in-depth analyses, investigative journalism, top opinions and a range of features. Journalism strengthens democracy. Invest in the future today.
Subscribe to News24
Related Links
Henry playing waiting game with MLS in limbo
Bayern star, ex-refugee Davies raises funds for those forced to flee
French football, rugby off until September, says French PM
Next on Sport24
Diogo Jota makes double as Liverpool smash Southampton