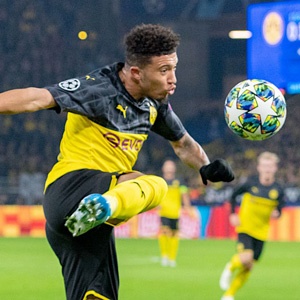 Borrusia Dortmund winger Jadon Sancho is eager to join Manchester United because he would be a leading star at the club, according to journalist Raphael Honigstein.

United have been heavily linked with a £120 million move for the England international, with Chelsea also said to be interested.

The winger has contributed 30 goals and 38 assists in 78 appearances for Dortmund in the last two seasons.

The Manchester City academy graduate is thought to want to join a club competing in the Champions League, which could prove to be a problem for the Red Devils.

And while United were fast improving before the coronavirus outbreak brought Premier League football to a standstill, it could still be some time before they are competing for the top prizes.

But Honigstein claims the promise of being the main man in Ole Gunnar Solskjaer's team could be enough to persuade Sancho to move to Old Trafford.

He told The Athletic: "I think United, certainly want a player of his appeal and prospect to build a new squad around. He's English and that's part of their thinking.

"But they can promise him to be the leading star in a new team that is emerging.

"From what I've been told that is quite appealing to him."

We live in a world where facts and fiction get blurred
In times of uncertainty you need journalism you can trust. For only R75 per month, you have access to a world of in-depth analyses, investigative journalism, top opinions and a range of features. Journalism strengthens democracy. Invest in the future today.
Subscribe to News24
Related Links
Premier League players will 'play their part' during pandemic, says PFA chief
Mata dreams of returning to Real Oviedo
Arteta showing interest in Athletic defender Nunez
Next on Sport24
Klopp proud of Liverpool form amid Van Dijk absence