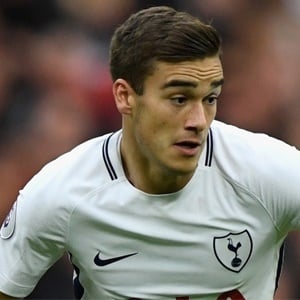 London - Tottenham midfielder Harry Winks has had surgery on a groin injury that is likely to rule him out for the rest of the season.

The England international has featured just three times for Mauricio Pochettino's side since February and now looks set to miss Tottenham's remaining matches this term.

That is a blow to Pochettino, whose side face Ajax in the Champions League semi-final first leg on Tuesday.

They also sit third in the fight to finish in the Premier League's top four with two games remaining.

"Harry Winks has today undergone groin surgery. The England midfielder will be monitored by our medical staff as he continues his recovery before commencing rehabilitation," a Tottenham statement announced on Monday.

Winks had enjoyed a breakthrough season with Tottenham before his injury issues.

The 23-year-old had established himself as a regular in central midfield and had also featured for England.

As well as missing the conclusion of Tottenham's campaign, Winks isn't expected to recover in time for England's Nations League semi-final in June.

We live in a world where facts and fiction get blurred
In times of uncertainty you need journalism you can trust. For only R75 per month, you have access to a world of in-depth analyses, investigative journalism, top opinions and a range of features. Journalism strengthens democracy. Invest in the future today.
Subscribe to News24
Related Links
'To infinity and beyond': Pochettino dreaming of Champions League glory
Brazil media skewers Neymar for striking fan
Leicester's Choudhury sorry over offensive social media posts
Next on Sport24
Five-star Man City move top of the Premier League