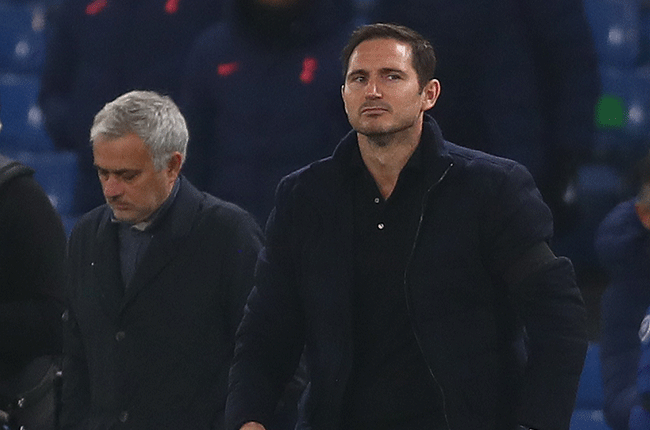 Tottenham moved back to the top of the Premier League after grinding out a 0-0 draw at Chelsea that bolstered their claim to be contenders for a first league title in 60 years.

As it happened | Chelsea v Tottenham

Chelsea enjoyed the better of a game of few chances, but Spurs showed the resilience and steel of Mourinho's three Premier League title-winning seasons when Chelsea manager to hold out for a fourth consecutive clean sheet.

A share of the spoils means Chelsea remain just two points behind their London rivals in third, with Liverpool trailing Tottenham only on goal difference.

By extending a now nine-game unbeaten run in the Premier League, Mourinho also ensured he did not lose three consecutive league meetings to the same manager for the first time in his career and to one of his former players, Frank Lampard.

Lampard showed what he has learned from the Portuguese as the cautious tactics from both saw the sides largely cancel each other out.

Chelsea were wary not to give Tottenham any chance to counter-attack in the manner that cut open Manchester United and Manchester City in recent weeks.

Spurs showed why with a sprightly team move that ended with Steven Bergwijn turning inside and blasting just over the bar early on.

The arrival of Edouard Mendy has resulted in a huge upturn in Chelsea's defensive record and the Senegalese produced a smart stop to deny Serge Aurier's strike from outside the box.

But that was the only effort on goal either side managed before the break as Chelsea controlled possession with little potent threat.

Timo Werner did produce an exquisite finish to fire in off the far post, but the goal was ruled out for offside against the German international.

Chelsea began to push with more purpose early in the second half as three times Tammy Abraham could not get a clean contact on inviting crosses from Reece James and Werner.

Lampard showed his intent to try and win the game by throwing on Christian Pulisic, Kai Havertz and Olivier Giroud in the final quarter, while Mourinho kept Gareth Bale in reserve for the full 90 minutes.

Hugo Lloris was finally forced into a meaningful save 10 minutes from time when the Spurs captain turned Mason Mount's powerful strike behind.

But the biggest chance to win the game came in stoppage time when Giroud pounced on a weak header from Joe Rodon, but he did not get enough on his attempted lob over Lloris and his French teammate easily saved.

We live in a world where facts and fiction get blurred
In times of uncertainty you need journalism you can trust. For only R75 per month, you have access to a world of in-depth analyses, investigative journalism, top opinions and a range of features. Journalism strengthens democracy. Invest in the future today.
Subscribe to News24
Related Links
Maradona's doctor investigated for involuntary manslaughter
Super-sub Cavani inspires Man United fightback
WRAP | Premier League
Next on Sport24
Premier League Covid cases down sharply