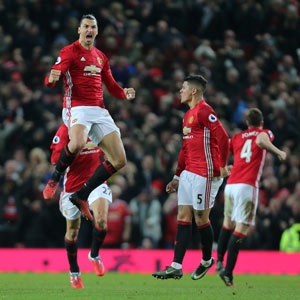 London - Manchester United's relative failure on the pitch has not been reflected off it as for the first time in over a decade they top Deloitte's Football Money League for revenue in the 2015/16 season.

United, who were last on top in the 2003/04 campaign, earned record revenue of €689 million and dislodged Champions League holders Real Madrid who have ruled the roost for the past 11 years.

United's topping of the revenue table, in a season where they failed to sparkle under Louis van Gaal in the league or the Champions League leading to him being sacked, is largely down to one thing according to Tim Bridge, Senior Consuiltant at Deloitte.

"It is the commercial power of Manchester United that takes them to the top of the league," he told AFP.

More galling perhaps for Real is that despite passing the €600 million barrier for the first time they also found themselves edged into third by bitter rivals Barcelona, who bettered them by just €100 000, €620.2 million to Real's €620.1 million, although the Catalan side have yet to top the table.

The top trio also filled the first three positions when Deloitte's first published the league in the 1996/97 season with United topping then on €88 million pretty much the amount they spent on Paul Pogba almost 20 years later.

United's reign, though, could be short-lived as they failed to qualify for the Champions League this season, even when figures from the huge Premier League TV deal that came into force this season are taken into account, according to Bridge.

"The TV deal will counterbalance some of it but much depends on where they finish in the league," said Bridge.

"The truth is it will be a three-way battle next year mainly because United are not in the Champions League and the impact of the exchange rate (it was €1.33 to the pound when Deloitte did the 2015/16 table as opposed to Wednesday's rate of €1.15) and weakening of the pound following the decision to leave the European Union.

"It will be challenging for them to stay on top next year."

City's appearance in the top five for the first time is on the back of reaching the Champions League semi-finals.

The English Premier League's commercial attractiveness compared to other European leagues is reflected with eight teams appearing in the top 20, five in the top 10 and generating total combined revenue of 3.2bn euros.

Champions Leicester break in for the first time and are 20th with revenue of 172.1m euros whilst rivals West Ham also crept into the top 20 in 18th spot with recorded revenues of €192.3 million.

However, thoughts of the EPL being an unstoppable force and all 20 clubs entering the Top 30 next year should not be taken for granted, says Bridge.

"When the new TV deal was announced two years ago we might well have thought more there would be more English clubs coming into the Money League for 2017/18," said Bridge.

"But with the rise of their European competitors it might not be as great as one thought.

"It is a testament to European football generally and it has to be said clubs are operating in a more financially sustainable manner now.

"The introduction by UEFA of European Fair Play (EFP) has seen a huge reduction in losses."

The decline of Serie A continues. Although there are four teams in the top 20, Juventus the highest at 10th, Deloitte think there is a real danger they could just have one representative next year.

"I think it certainly reflects the situation in Italy," Bridge said.

"AC Milan were in the top five in 2002/03 so their decline (they are 16th and even passed by rivals Roma) has been relatively steady over the past 13 years.

"It kind of reflects the inability to generate new revenues in Italy both commercially and match-day, antiquated stadia being one of the issues.

"Inter Milan (19th) are almost certainly going to drop out and there is a real danger the same can happen to AS Roma and AC Milan."

We live in a world where facts and fiction get blurred
In times of uncertainty you need journalism you can trust. For only R75 per month, you have access to a world of in-depth analyses, investigative journalism, top opinions and a range of features. Journalism strengthens democracy. Invest in the future today.
Subscribe to News24
Related Links
‘Ibrahimovic invaluable for Man United youngsters’
Man United 'first' to appoint counter-terror chief
United verbally agree Griezmann deal - report
Next on Sport24
Premier League clubs to decide if pre-international matches will be pay-per-view