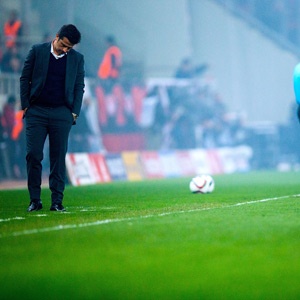 Phelan was sacked earlier this week less than three months after being handed the Hull reins on a permanent basis.

Hull plan to appoint a new manager by the weekend and widespread reports in the UK have indicated that Portuguese coach Silva is in advanced talks with the club.

Silva left Olympiakos for personal reasons during the summer after steering the club to the Greek title last season.

The 39-year-old had built a reputation as one of the brightest young coaches in Europe during his time in Portugal too after spells at Estoril and Sporting Lisbon.

However, Silva is untested in the Premier League and will take over a struggling side lying three points adrift of safety.

Hull vice-chairman Ehab Allam remains confident that Hull can still beat the drop though after releasing a statement on Phelan’s sacking.

"I maintain the belief that the current squad, with two or three key additions during the current transfer window, is good enough to survive in this division,” he said.

"I acknowledge that our position in the table will make recruitment more challenging, however all of our efforts are now focused on enhancing the existing squad with Premier League survival our priority.

“Although there have been some positive performances in recent weeks, we sit bottom of the Premier League and I felt now was the right time to take a fresh approach."

Hull's next English Premiership fixture will be a home clash on January 14 against a high-flying Bournemouth team who come off of an impressive 3-3 draw against Arsenal.

We live in a world where facts and fiction get blurred
In times of uncertainty you need journalism you can trust. For only R75 per month, you have access to a world of in-depth analyses, investigative journalism, top opinions and a range of features. Journalism strengthens democracy. Invest in the future today.
Subscribe to News24
Related Links
No festive goodwill from trigger-happy owners
Struggling Hull axe coach Phelan
Phelan sidesteps Eto'o talk
Next on Sport24
'World-class' Jamie Vardy rocks Arsenal as Leicester go 4th