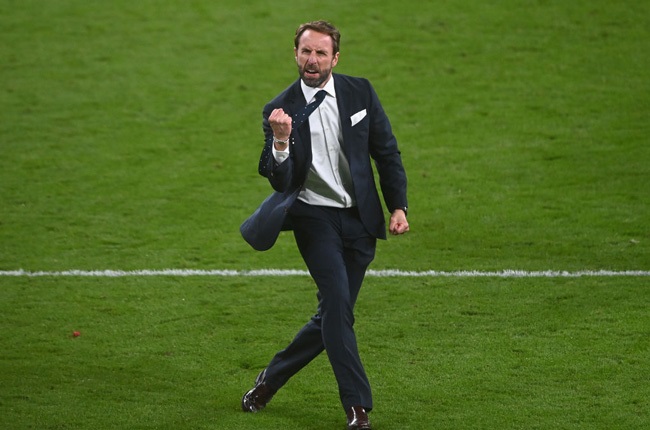 Gareth Southgate says England are ready to make history in Sunday's Euro 2020 final as they chase a first major trophy in 55 years, but Italy are in the mood to spoil the party at Wembley.

Southgate's side have sent the nation into a frenzy by reaching their first European Championship final, leaving them one win away from a first title since the 1966 World Cup.

Along with 60,000 lucky fans at Wembley, millions across England will be glued to the final on television, with some schools and businesses set to open later on Monday to allow a lie-in after the 21:00 (SA time) kick-off.

Hours before kick-off, supporters draped in red and white flags congregated along the famous approach to the stadium, Wembley Way, downing pints of beer and chanting an array of England anthems as excitement built.

Johnson has decked the outside of his official Downing Street residence with dozens of St George's flags.

After England were given a rousing send off, with fans lining the streets on the journey from their St George's Park base to the team hotel on Saturday, Southgate urged England to harness the outpouring of emotion into a winning formula in the final.

"We had a fantastic reception when we left St George's Park. All the local villages had come out to line the route and people pulled up so you got an idea of what was going on outside the bubble that we've been in.

"The players need to feel that warmth and support. It has definitely helped inspire us. We're in a final and we are here to win.

"Now we want to go and bring the trophy home for everybody."

Southgate has revolutionised English football since taking charge in 2016 and his team have impressed in Euro knockout stage wins over Germany, Ukraine and Denmark.

But England were beaten in the 2018 World Cup semi-finals by Croatia and only a final triumph against Italy will be enough to satisfy them now.

"That is the challenge now. We have been knocking down barriers on the way but we have to go out there and win it," England captain Harry Kane said.

Not everyone is buying into the patriotic fever gripping England ahead of the final to Euro 2020 -- delayed a year by the coronavirus pandemic.

With England playing six of their seven Euro matches on home turf at Wembley, some rival nations claim UEFA have tipped the tournament balance too heavily in favour of the Three Lions.

England's neighbours have made no attempt to hide their wish for an Italy victory.

Scottish newspaper The National featured a front-page picture of Italy manager Roberto Mancini mocked up as William Wallace in the film Braveheart above the heading "Save us Roberto...You're our final hope!"

After the Scottish, German and Danish national anthems were all booed at Wembley earlier in the tournament, Southgate told England fans to respect the Italians.

"We know that in actual fact, when we play abroad and fans boo our anthem, it probably inspires us even more. We should be respectful," he said.

But Italy captain Giorgio Chiellini is unfazed by the prospect of having to play in such a hostile atmosphere.

"There is always a home team. That has happened in the past and it won't be the last time," he said.

"There is no controversy. It is a dream for football lovers everywhere to be involved in the final and it will be even better if we can win it."

Italy have been arguably the team of the tournament, sweeping through the group stage with a perfect record before knocking out Austria, top-ranked Belgium and Spain to reach the final.

Revitalised since Mancini took over after their embarrassing failure to qualify for the 2018 World Cup, the Azzurri are on a remarkable 33-match unbeaten run.

The four-time world champions' lone European Championship triumph came in 1968. They have lost their previous two finals in 2002 and 2012.

Veteran defender Chiellini called on his team-mates to stay focused with the trophy within touching distance.

"We need to thrive and savour this occasion. When we met up before the competition I said we needed just that hint of madness and to keep cool heads," Chiellini said.

"That has brought us this far and hopefully it can take us to win the competition."

"A Sunday for lions. Do it Azzurri," headlined Italian daily Gazzetta Dello Sport.

Italians are praying for sporting deliverance from not just Wembley on Sunday - with Matteo Berrettini, the first of their countrymen to reach a Wimbledon singles final, facing Novak Djokovic six hours before kick-off across the capital on centre court at the All England Club.