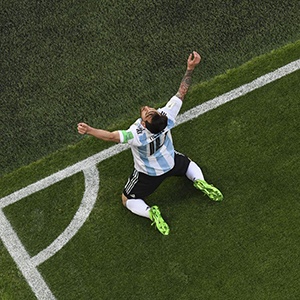 Buenos Aires - An uncharacteristically angry Lionel Messi revealed on Friday how he struggles to deal with criticism of his performances for Argentina's national team, saying that even his six-year-old son was questioning why he was judged so harshly in his country.

The 31-year-old's return to the national side last week after an eight-month absence was marred by a humiliating 3-1 loss to Venezuela in a friendly. A groin strain then forced him to sit out an unconvincing 1-0 victory over Morocco.

"My six year old son Thiago asked me why they were killing me in Argentina. He watches videos on YouTube all the time, and he asks me why they don't want me," Messi said.

"I have to go through those things, but it doesn't matter."

The Barcelona star took a break from international duty after a disappointing World Cup last year, but his highly anticipated return proved a flop as Argentina lost to unfancied Venezuela in Madrid.

He said he would continue to play for his country even though "a lot of people told me not to do it, not to suffer again."

Argentine fans and journalists have often taken their frustrations at under-par performances by the national team out on Messi, who is always expected to perform at the levels he does for Barcelona, where he is surrounded by star players.

Messi hit out at repeated lies about him in the media.

"People buy into everything that's said. So then I'm the 'son of a bitch' and the ones that feel the hurt most of all is my family. There are many lies told. There are new lies every day."

We live in a world where facts and fiction get blurred
In times of uncertainty you need journalism you can trust. For only R75 per month, you have access to a world of in-depth analyses, investigative journalism, top opinions and a range of features. Journalism strengthens democracy. Invest in the future today.
Subscribe to News24
Related Links
'No regrets' Van Dijk tells Liverpool to savour title pressure
Sarri calls for rule to halt matches due to racist abuse
Messi, Suarez fit to start 'fundamental' week for Barca
Next on Sport24
EPL TV | The latest videos from the English Premier League

Choose your newsletters
Voting Booth
What are your views on the World Rugby men's Player of the Year nominations for 2021 not including any Springboks?
Please select an option Oops! Something went wrong, please try again later.
It's a disgrace! Both Siya Kolisi AND Eben Etzebeth should have been nominated!
39% - 5417 votes
Siya, at the very least, should have been included after a superb season
7% - 932 votes
Etzebeth has been SA's best player this year and should feel hard done by
20% - 2785 votes
Get over it! Moaning about this just sounds like sour grapes!
34% - 4629 votes
Previous Results
Showmax
The story of a legend: Sir Alex Ferguson