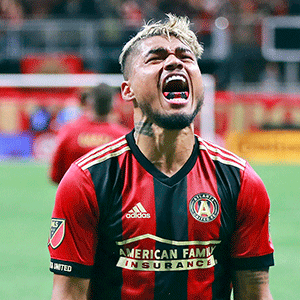 Atlanta's MLS Most Valuable Player Josef Martinez led the way in front of a league-record crowd of 73 019 at Mercedes Benz Stadium, opening the scoring in the 39th minute with his 35th goal of the 2018 campaign.

Argentine defender Franco Escobar doubled the score in the 54th minute as Atlanta made coach Gerardo "Tata" Martino's last match at the helm a victory before he departs to take over as coach of Mexico.

Atlanta pressed from the beginning. Martinez was sent tumbling by a challenge from Larrys Mabiala in the penalty area but play was waved on and VAR backed up the call.

Atlanta's Miguel Almiron had a clear chance in the 29th minute from a cross from Greg Garza but Portland goalkeeper Jeff Attinella dived right to swat the shot away.

Ten minutes later Atlanta seized the lead as a sliding Michael Parkhurst sent the ball toward the penalty area and Martinez beat Liam Ridgewell at the top of the box then rounded Attinella to slot the ball into an empty net.

The Timbers pushed forward early in the seocnd half, but found themselves 2-0 down after 54 minutes.

Martinez won a free kick, then appeared at the near post to flick on Almiron's service into the path of Franco Escobar, who fired into the bottom corner.

Atlanta, who finished second in the Eastern Conference in the regular season - denied the Supporter's Shield by Eastern rivals New York Red Bulls - eliminated New York City FC in the quarter-finals and the Red Bulls in the conference final to reach the championship match.

We live in a world where facts and fiction get blurred
In times of uncertainty you need journalism you can trust. For only R75 per month, you have access to a world of in-depth analyses, investigative journalism, top opinions and a range of features. Journalism strengthens democracy. Invest in the future today.
Subscribe to News24
Related Links
WRAP: English Premiership
Fans unhappy as Chiefs reappoint Middendorp
Son, Alli spearhead Spurs to victory at Leicester
Next on Sport24
Cristiano Ronaldo becomes first player to score 20+ goals in 12 consecutive seasons