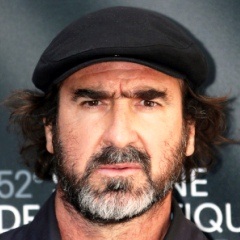 Paris - Football legend Eric Cantona was a brooding artist on the field. Now he is proving that he is also one off it as a book of his drawings is published.

The former Manchester United star muses on sex, death, ageing and madness in "My Notebook", a collection of 100 or so sketches and observations on the absurdities of life.

Rather than carry a smartphone, French-born Cantona - the son of a nurse-turned-painter - said he always carries a little sketchpad.

"While you pretend you are very busy with your text (messages) I have my little pen and notebook," he said in the preface to the book, which was published in French and English Thursday.

He depicts his post-football inner self as a forlorn and fumbling though recognisably Cantona-esque character with oversized feet, who never quite does what he should.

His alter ego, a kind of a Matisse lost-boy with a Picasso phallus obsession, finds himself beset by his own inadequacy in the face of womankind and an indifferent world.

Although the book is full of visual jokes and word play, the man fans still call "God" and "The King" for revolutionising English football, worries that his crown will tumble.

His fondness for philosophy - both cod and real - is also evident as he ponders death and religion, as well as his own foibles.

And lovers of his famously gnomic utterances will not be disappointed.

The man whose delphic reaction to his conviction for kung-fu kicking a fan in 1995 was, "When the seagulls follow the trawler, it is because they think sardines will be thrown into the sea", outdoes himself with a new piscine metaphor.

One sketch of a fish man nibbling huge toes is captioned, "The dead skin of giants and the submarine of the poor" - which may be a comment on fame, or on trickle-down economics.

Cantona, who now works as an actor and producer, told reporters that he was not afraid of being ridiculed or of revealing too much of himself.

"I am not afraid of the unconscious, I am afraid of emptiness," the 51-year-old told the French daily Liberation.

"I wanted to draw like a child. I sometimes even closed my eyes (while I drew). Because I think we have learned too much, we want to master everything. I wanted to get back to my innocent, unconscious self. But I haven't quite been able to."

Cantona said that he was fascinated by madness, "it's the centre of my life... I am at one level afraid of going mad and at another of not being mad. Actually I walk that line, that's where I am happy."

The former Number 10, who helped turn United from perennial underachievers into Champions League winners, said he found it too "pretentious" to call himself an artist, or even an actor, although he starred in the acclaimed 2009 Ken Loach film "Looking for Eric" and is married to French star Rachida Brakni.

"It is hard to describe what I am these days. Sometimes when I am filling in official papers and they ask the profession I write 'living'. It's a full-time job," he said.