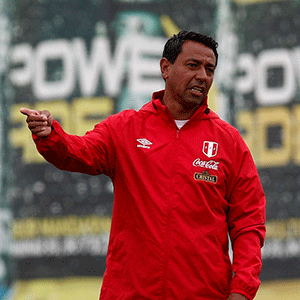 Iconic former Newcastle United winger Nolberto Solano was detained in his native Peru for breaking the country's coronavirus lockdown to go to a party, according to reports on Friday.

The 45-year-old became the first Peruvian to join an English Premier League team when he signed for Newcastle in 1998, quickly becoming a firm fan favorite.

Television channel RPP said Solano, who is part of the backroom coaching staff on the Peruvian national team, was arrested on Thursday night in the La Molina neighborhood of the capital Lima.

"He was taken to the La Molina police station for having not respected the mandatory window to stay at home, but he was later released," said RPP.

"What I did was not good, but don't make me out to be everything that's bad in the country. I was in a house that's not my house, I see a lot of other people doing it," Solano told RPP.

"I understand everything that is being said about protection. I think you're making a bigger deal out of this situation than what it is," added Solano, who also played for Aston Villa, West Ham and Leicester City during more than a decade in England.

Before that he had made his name playing for Boca Juniors alongside Argentina great Diego Maradona, who used to call him the "little maestro" due to his free-kick expertise.

Solano denied he had been to a party claiming he was simply at a gathering of six people, two blocks from his home, adding that he doesn't have the virus.

Some 18 000 people have been arrested for breaking home isolation rules in a country that has reported 580 coronavirus cases and nine deaths.

Interior Minister Carlos Moran has said the government is compiling a register of those to break the rules and that offenders could face up to three years in prison.

We live in a world where facts and fiction get blurred
In times of uncertainty you need journalism you can trust. For only R75 per month, you have access to a world of in-depth analyses, investigative journalism, top opinions and a range of features. Journalism strengthens democracy. Invest in the future today.
Subscribe to News24
Related Links
Atletico join Espanyol in requesting player, staff paycuts
Lampard wary of pushing Chelsea players too hard during virus lay-off
Dancing Klopp says Liverpool spirits are high despite virus lockdown
Next on Sport24
Ceferin mulling single host nation for Euro 2020, says Rummenigge