Fernandes wants trophies to back up Cantona comparisons 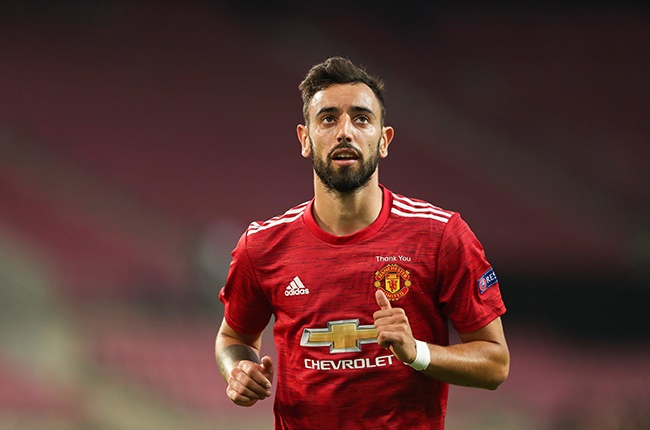 Bruno Fernandes of Manchester United during the Europa League quarter-final against Copenhagen in Cologne on 10 August 2020.
James Williamson - AMA/Getty Images

Bruno Fernandes wants Manchester United to learn from the pain of two semi-final defeats already this season to cap the Portuguese's transformational impact on the club by winning the Europa League.

United, who lost to Manchester City and Chelsea in the last four of the League Cup and FA Cup earlier in the campaign, face five-time winners Sevilla in the first semi-final on Sunday behind closed doors in Cologne.

Fernandes did not arrive at Old Trafford until after the League Cup exit to City in January and has made a massive difference to drag United into the Premier League top four and secure a place in the Champions League next season.

The former Sporting Lisbon midfielder's impact has earned comparisons to Eric Cantona, who led United to a first league title in 26 years after joining from Leeds in November 1992.

"For me Cantona was an amazing player for the club. I need to do much, much better to be compared to him," said Fernandes. "For me coming to Manchester is about winning trophies. I will be happy if we win the Europa League.

"It is time to step up for big players. You have to have 100 percent focus. We have learnt it is very painful to lose a semi-final."

Fernandes has flourished where other big-money signings have floundered as United have failed to win a league title since Alex Ferguson's retirement in 2013 despite spending nearly £1 billion in transfer fees.

But the Portuguese international, who has scored 11 goals and provided eight assists in 21 appearances, said his own 55 million price tag was a source of confidence rather than a burden.

"When a club pays for a player £55 million you have confidence," he added.

"All the conversations I had with my coach and my teammates has helped me. When you have that voice on your own back telling you to do your own game it is easier for you."

United have had six days to prepare for the semi-finals after Fernandes's extra-time penalty saw off FC Copenhagen 1-0 in the last eight.

Ole Gunnar Solskjaer welcomed the extra rest, but is wary that the drawn-out format of the competition to not clash with the Champions League latter stages in Lisbon will give his side precious little preparation time for next season.

The 2020/21 Premier League season is due to get underway in four weeks, although clubs still in European competition have been assured they will get at least a 30-day break.

"We have had a few good days preparing, recovering and training. It's not very often we have six days between games, so we are ready," said Solskjaer.

"It's almost a pre-season for next season because it is not very long before we have to get going again.

"It's just the time we are in. We can't complain because this is the world we are in now."

We live in a world where facts and fiction get blurred
In times of uncertainty you need journalism you can trust. For only R75 per month, you have access to a world of in-depth analyses, investigative journalism, top opinions and a range of features. Journalism strengthens democracy. Invest in the future today.
Subscribe to News24
Related Links
Recovery or separation for Messi as Barcelona face up to change
Kaizer Chiefs extend Absa Premiership lead with stunning comeback win over Polokwane City
Stellenbosch move further clear of relegation scrap with win over Golden Arrows
Next on Sport24
EPL TV | The latest videos from the English Premier League