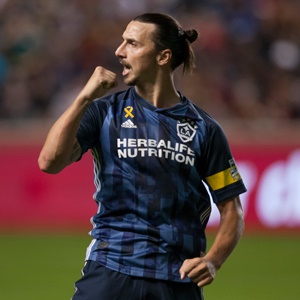 Los Angeles - Zlatan Ibrahimovic and Cristian Pavon both scored as the LA Galaxy secured a playoff spot with a 2-1 win over Real Salt Lake on Wednesday.

Vela scored in LAFC's 3-1 win over Houston on Wednesday.

The Galaxy now have 51 points and move to third in the Western Conference with the victory, which sealed their first playoff spot since 2016.

They have won three straight for the first time since winning five in a row during March and April.

Nedum Onuoha scored late for hosts Real Salt Lake, who are winless in their past three games.

Elsewhere, midfielder Hassani Dotson scored in the 90th minute to put Minnesota United into the playoffs with a 2-1 come-from-behind victory over Sporting Kansas City.

Midfielder Osvaldo Alonso scored Minnesota's first goal in the 70th minute as they rallied for the victory to land a playoff spot for the first time in their three-year MLS history.

"We somehow found a way tonight. It wasn't pretty at times," said Minnesota United coach Adrian Heath. "We still have a lot of work ahead of us."

Dotson's close-range shot deflected off the side of Sporting K.C. defender Botond Barath and past the hands of goalkeeper Tim Melia.

Minnesota United moved into second place in the Western Conference with the victory, while Sporting Kansas City lost their fourth straight match and were eliminated after making the postseason in each of the last eight seasons.