I'm sure Messi will stay - Rakitic 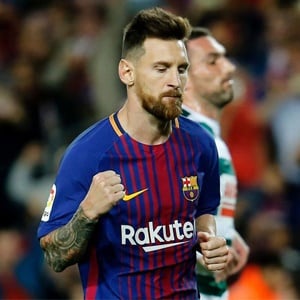 Turin - Barcelona midfielder Ivan Rakitic expressed his confidence on Tuesday that Lionel Messi would sign a new contract to stay at the Camp Nou.

Barcelona announced last summer a three-year extension of the Argentinian's contract until 2021 - agreed with his father and agent - but the 30-year-old has still not made the agreement official.

"Leo is the same as usual. We don't discuss it. Everyone has his ideas and secrets, you have to respect that. But I'm sure he'll stay," said Croatian Rakitic when asked about Messi's contract situation with the Catalan side.

"His name is part of Barca history, it's like the emblem. He contributed to making Barca great," continued the attacking midfielder ahead of Wednesday's Champions League clash against Juventus in Turin.

"Of course I can't tell you at 100% that he will stay. That the fans await his signature is normal. Me too as I want to continue playing with Leo. We imagine that he thinks the same and that we still have a long way to go together.

"I've confidence in my president and in Leo. If he thinks that it's necessary to wait, that's how it is. Leo knows how the fans feel about him. But we must not annoy him with that. We have to let him make his decision calmly."

Messi's hesitancy to commit his future to Barcelona after 16 years with the club has left fans increasingly nervous, especially after the departure of Brazilian star Neymar to Paris Saint-Germain in the close season.