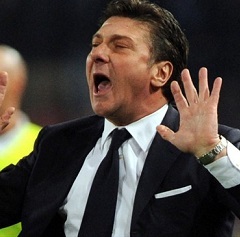 Milan - Inter Milan owner Erick Thohir has given the club's under-fire coach Walter Mazzarri his backing despite Roberto Mancini being linked with a return to the San Siro.

A 4-1 home defeat to then basement side Cagliari 10 days ago and Sunday's 3-0 defeat at Fiorentina dropped Inter to 10th in Serie A, already 10 points behind leaders Juventus.

It is the first time Inter have conceded seven goals in two games since conceding eight from a 4-4 draw with Palermo and a 4-0 defeat to Roma while under Claudio Ranieri in 2012.

Media reports have speculated Mazzarri could be replaced before the end of the season, with Tuesday's Gazzetta dello Sport suggesting former coach Roberto Mancini could be the "dream" solution.

Mancini helped Inter to a club record of three consecutive titles during a four-year spell in 2004-2008, and is currently out of work after leaving Galatasaray last season.

But Thohir has indicated the 53-year-old Mazzarri's job is safe for now.

"Mazzarri will do his best for Inter and we will give him the time he needs. He will continue to have our support," Thohir was quoted as saying.

"The players now need to have a period of introspection in order to prepare for the next match in the best way possible."

Inter next host Napoli after the international break. Despite a mediocre start to the season, Rafael Benitez's side have won their past two games and finally look to be on the ascendancy.

But ahead of a clash that will have special significance for Mazzarri, who led Napoli to a runner-up place in 2013, Thohir has called for improvements.

"The defeats against Cagliari and Fiorentina may have come as a bit of a shock, but I'm sure that everybody is desperate to improve," added the Indonesian.

"Serie A is extremely competitive so we must be patient. We need to closely analyse the period the team is going through and we hope that the international break gives us the chance to do that."

We live in a world where facts and fiction get blurred
In times of uncertainty you need journalism you can trust. For only R75 per month, you have access to a world of in-depth analyses, investigative journalism, top opinions and a range of features. Journalism strengthens democracy. Invest in the future today.
Subscribe to News24
Related Links
Juve confirm offers were rejected
Inter trio looking promising
Roma player cautioned for hugging his gran
Next on Sport24
Kamara 'vindicated' after Slavia's Kudela handed 10-match ban for racism