Jali to play in Uefa Cup 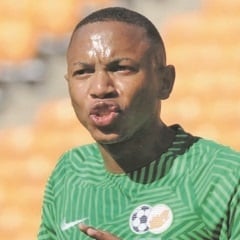 Johannesburg - Bafana Bafana midfielder Andile Jali will play in the Uefa Europa Cup for the first time next season ­after three and a half years in Belgium.

This after his club KV Oostende exercised an option to renew his contract for a further year, despite the player feeling he was ready to move to a bigger league.

His side has qualified for the Uefa Europa Cup, giving the player a chance to showcase his talent to a bigger audience and hope that clubs will vie for his signature.

The stocky player told City Press in ­Nigeria that he almost signed for Leeds ­United last season, but Bafana’s lowly Fifa ranking (they are currently 65th in the world) scuppered the deal and he could not secure a work permit in ­England.

He said he has also been on the verge of signing for a Chinese club, but that agreement fell through after the club owner sold his company, exhausting the club’s coffers.

Jali is, however, not disappointed that the moves did not materialise and says he will work hard to secure a move in the near ­future.

The player says he is starting to enjoy life in Belgium after his spate of injuries.

In April, the last time Jali played for ­Bafana, there were concerns about his weight, but the 27-year-old denies he put on extra kilos.

“I don’t have weight issues,” he said. “It’s just that people had not seen me for a long time and they started talking. But that didn’t bother me at all as I knew it was not the case. If that was the case, my club would have told me to work on it”.

He says he likes Belgium and the people there, adding that he will stick around for ­another season and see what happens.

The former Orlando Pirates star player, who has been linked with a move to ­Mamelodi Sundowns, says coming back home was not an option at this stage.

He says he would like to stay in Europe for another three years before returning home.

“Sometimes loyalty doesn’t pay the bills, so money talks. If I get more money at home, then I will consider that”.

He says his game improved drastically since he moved to Belgium, except for shooting.

“You know I have been fined five or six times for not shooting at goals, but for ­passing the ball to my team-mates instead.” he revealed. He had one goal and five assists last season.

He wishes South Africans knew that playing in Europe was not as easy as it seemed.

“There are lot of challenges and the ­conditions are not nice. People must understand that we, as South Africans, are not as hungry as others from other parts of the continent because there’s still luxury at home. Sometimes we have to push ourselves. No one will if we don’t.”