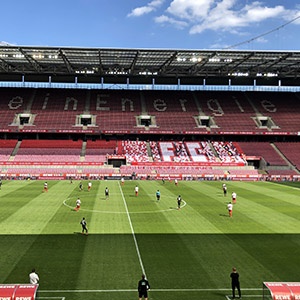 The four-time German champions, now in the third division, said the three people concerned will be re-tested during the day.

They, and anyone who came into contact with them, have been placed in strict quarantine.

The two top divisions of the Bundesliga resumed the season behind closed doors last weekend after a two-month suspension, but play in the third division is suspended until 30 May.

Players, coaches and backroom staff are being regularly tested for the virus.

The German league has claimed its restart under stringent conditions that can serve as a blueprint for other leagues, but officials were forced to remind players of social distancing rules after several instances of hugging in goal celebrations in the weekend's matches.

We live in a world where facts and fiction get blurred
In times of uncertainty you need journalism you can trust. For only R75 per month, you have access to a world of in-depth analyses, investigative journalism, top opinions and a range of features. Journalism strengthens democracy. Invest in the future today.
Subscribe to News24
Related Links
Spurs investigate THIRD alleged lockdown breach by Serge Aurier - this time for a haircut
UEFA chief hopes Champions League will finish by 'end of August'
Emre Can: 'I would never play for United'
Next on Sport24
FIFA to consult football leaders on international calendar

Choose your newsletters
Voting Booth
With the Springboks losing their last two matches against Australia, how concerned are you?
Please select an option Oops! Something went wrong, please try again later.
Very concerned! Something is not right ...
58% - 2955 votes
I'm not worried. Every team has a bad game. The Boks will bounce back.
18% - 891 votes
It's too early to tell. Let's see how they go against the All Blacks.
24% - 1207 votes
Previous Results
Showmax
How Jurgen Klopp saved Liverpool