Amsterdam - More than twenty years after the football world witnessed the schoolboy Patrick Kluivert lead Ajax to Champions League glory his son Justin is bidding to help the Dutch giants into the Europa League final.

Justin Kluivert, 17, is turning heads in the Ajax red and white and some say he's even more skillful than the father, who went on to enjoy a top level career with AC Milan and Barcelona and who is now sports director at Paris Saint-Germain.

He even looks the spitting image of his father in that unforgettable final, running on to Frank Rijkaard's pass to give Ajax a 1-0 1995 European final win over Milan before he had even left school.

"I like it when I am compared to my dad. He had a great career, and I hope to have one too," Justin told football magazine FourFourTwo recently.

The father was more of a penalty area predator and a real number nine.

"He possesses speed and courage, and knows how to pass," former Ajax great Sjaak Swart said of the younger Kluivert last month.

Justin - the second of four sons - made his Ajax debut in January 2017 and has since played in the right wing slot of the classic Ajax 4-3-3 formation.

There was a wave of nostalgia in the Netherlands in March when he scored his first top-flight goal ten years to the day after his father's final strike as a professional with Lille.

Given his background, fans will doubtless be praying he can do something in the Europa League against Lyon in their semi-final first-leg on Wednesday.

Ajax coach Peter Bosz says his starlet is "a product of the Ajax system and terribly effective on one-on-ones".

The player's main strength seems to be in his mazy runs and dribbles into the box that he has honed since his days in the youth ranks where his father was head coach.

Fans have picked up on the feel good vibe of the whole thing with Matthijs de Ligt, also 17, making a first team impact as a defender plucked from the youth ranks and cast into the spotlight.

A recent altercation with PSV Eindhoven's Juergen Locadia shows the youngster has found the guts to play alongside men.

"I'm young, but I demand respect. After the match we can have a laugh and relax, but not out on the pitch," Kluivert warned. 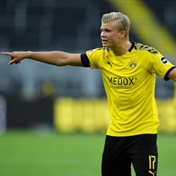