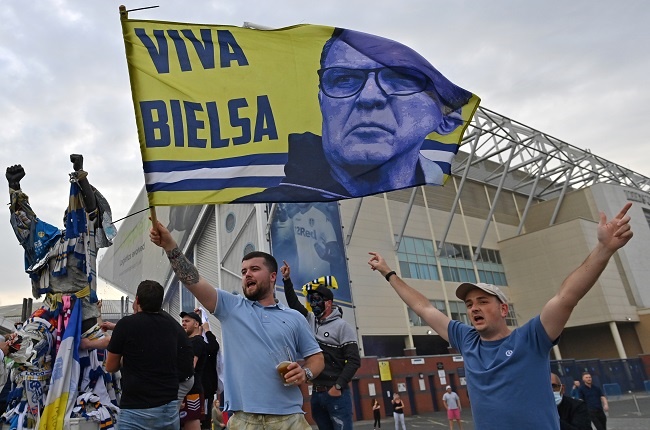 Leeds United supporters gather beside the statue of club legend Billy Bremner, outside their Elland Road ground to celebrate the clubs return to the Premier League after a gap of 16 years, in Leeds, northern England on July 17, 2020. - Leeds United were promoted to the Premier League on Friday after West Bromwich Albions 2-1 defeat at Huddersfield ensured the Championship leaders will end their 16-year exile from the top-flight. (Photo by Paul ELLIS / AFP)

Leeds United celebrated promotion to the Premier League on Sunday with a 3-1 victory at Derby County as the Championship winners turned on the style.

Marcelo Bielsa's side had started their promotion celebrations on Friday when second-placed West Bromwich Albion lost to Huddersfield.

Leeds were confirmed as champions on Saturday after third-placed Brentford were beaten by Stoke.

Bielsa made a host of changes in his side's first match since they were assured of ending the club's 16-year exile from England's top flight.

But after Chris Martin had given Derby a second-half lead, Bielsa's new-look side hit back through Pablo Hernandez, Jamie Shackleton and Matthew Clarke's own goal to register their 27th league win of the season.

Derby's players gave Leeds a guard of honour before kick-off, which could help ease the simmering rivalry between the clubs following last season's 'Spygate' affair.

Tension between the two clubs had mounted further following Derby's celebrations at Elland Road after their play-off semi-final triumph last season, but there was no apparent animosity lingering between the players.

A stoppage-time winner from Patrick Schmidt earned Barnsley a vital 1-0 victory over Nottingham Forest at Oakwell.

They are two points behind fourth-from-bottom Charlton, who visit Leeds on Wednesday.

Barnsley face a daunting trip to Brentford, who are still in the hunt for automatic promotion.

Fifth placed Forest should still qualify for the play-offs as they hold a three-point lead and a superior goal difference over seventh placed Swansea.

We live in a world where facts and fiction get blurred
In times of uncertainty you need journalism you can trust. For only R75 per month, you have access to a world of in-depth analyses, investigative journalism, top opinions and a range of features. Journalism strengthens democracy. Invest in the future today.
Subscribe to News24
Related Links
WRAP | English Premiership
Southampton push Bournemouth closer to relegation
Carlo Ancelotti lays down a European challenge for his Everton squad
Next on Sport24
Ibrahimovic poised for Sweden comeback: reports