Rosario - Football superstar Lionel Messi is to marry his long term partner and mother of his two children, Antonella Roccuzzo, in their hometown of Rosario on June 30, the Argentina striker revealed on Thursday.

"The wedding will be held in Rosario, Argentina, on June 30," Messi's personal communications agency 6Pointer said.

The ceremony between the five-time Ballon d'Or winner and his childhood sweetheart is to be held at Rosario cathedral and many of Messi's Barcelona team-mates are expected, chief amongst them the couple's closest friends, Uruguay striker Luis Suarez and his wife Sofia Balbi.

Messi turns 30 on June 24 and Roccuzzo is 29 and the pair have been living together for nine years and have two children, four-year-old Thiago and baby Mateo.

We live in a world where facts and fiction get blurred
In times of uncertainty you need journalism you can trust. For only R75 per month, you have access to a world of in-depth analyses, investigative journalism, top opinions and a range of features. Journalism strengthens democracy. Invest in the future today.
Subscribe to News24
Related Links
Man United to release Ibrahimovic - reports
Comitis talks up Tinkler's replacement
Chiefs terminate John Pantsil's contract
Next on Sport24
Hand of God 'with my right' - Maradona's dream 60th birthday gift 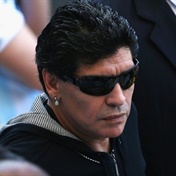