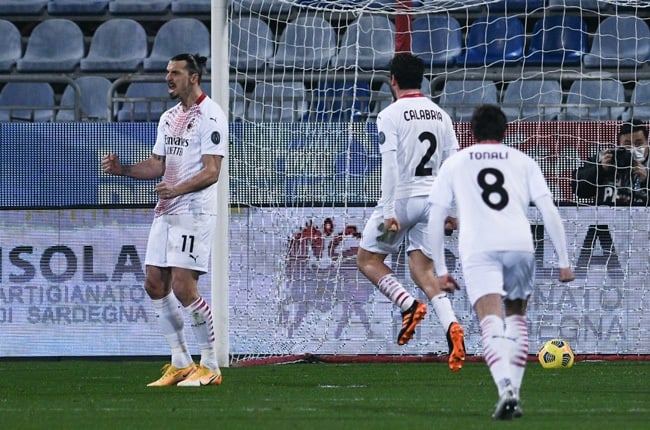 Milan's giants will do battle in the Italian Cup quarter-finals on Tuesday after a disappointing weekend of Serie A action for Italy's top two teams.

League leaders AC Milan were swept away 3-0 by Atalanta at the San Siro on Saturday, at the same time as second-placed Inter Milan could only manage a goalless draw at Udinese which leaves them two points behind their city rivals.

The teams' star strikers Zlatan Ibrahimovic and Romelu Lukaku, who have each bagged 12 goals this league campaign, both drew a blank at the weekend but will be hoping for more from the second meeting this season between the two teams.

Milan's veteran forward Ibrahimovic scored a brace the last time they met in a 2-1 league win in October, with Lukaku also netting for Inter.

Ibrahimovic returned for Milan this month after seven weeks out injured, scoring a brace against Cagliari, and is looking for his first Cup goal of the season.

Lukaku headed in an extra-time winner against Fiorentina in the last 16, but the Belgium forward has failed to score in Inter's last four league games.

Their trophy hopes now lie on domestic success after their early European exit.

"Winning the Scudetto and qualifying for the Champions League would be significant for Inter, but the Italian Cup is a trophy that we respect," said coach Antonio Conte.

"We won't be taking it lightly and will try to win, as we always do."

Inter's last major trophy was the 2011 Italian Cup, while Milan - who last won the league that same year - have not tasted success in the competition since 2003.

Making it through to the last four by beating such strong opposition on Tuesday would be huge after their limp defeat by Atalanta.

"The Italian Cup derby could bring us to the semi-finals but above all it's an opportunity to immediately turn the page and avoid a difficult emotional crisis," said Milan coach Stefano Pioli.

Holders Napoli are also looking for a lift Thursday as they take on Serie A newcomers Spezia, who dumped Roma out of the tournament last week.

Gennaro Gattuso's side lost the Italian Super Cup to Juventus last week and fell 3-1 at Hellas Verona in Serie A on Sunday.

Juventus, winners of four of the last six Italian Cups, take on the only Serie B side remaining, SPAL.

Atalanta - whose only major trophy was the Italian Cup in 1963 - host Lazio, winners in 2019, with the two sides set for a return trip again next weekend in the league.

Winners go through to a two-legged semi-final on February 3 and 10, with the final on May 19.

We live in a world where facts and fiction get blurred
In times of uncertainty you need journalism you can trust. For only R75 per month, you have access to a world of in-depth analyses, investigative journalism, top opinions and a range of features. Journalism strengthens democracy. Invest in the future today.
Subscribe to News24
Related Links
Black Leopards sack Dylan Kerr as head coach
Dominic Calvert-Lewin makes his mark as Everton ease past Sheffield Wednesday
Solskjaer hails Bruno Fernandes as Man United star downs Liverpool
Next on Sport24
EPL TV | The latest videos from the English Premier League