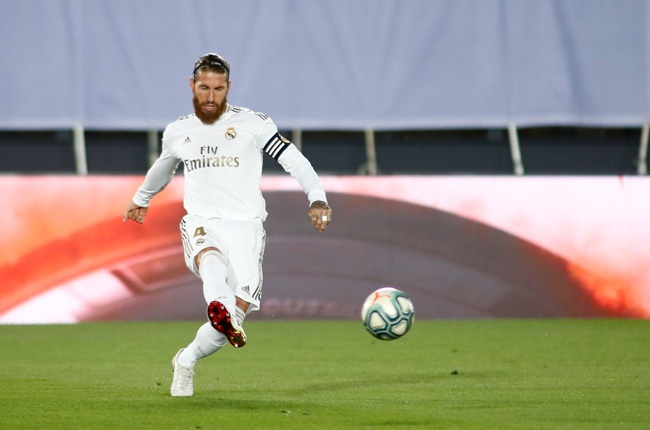 Sergio Ramos scored his 22nd consecutive penalty on Sunday as Real Madrid held on for another 1-0 win over Athletic Bilbao to inch closer to winning La Liga.

Ramos' fifth goal in seven games since the restart gives Madrid a seven-point lead over Barcelona, who play later on Sunday at in-form Villarreal.

Anything but a victory for Barca would probably leave them too much to do with four games remaining, especially as Madrid own the superior record head-to-head.

This was Madrid's toughest fixture left and they might have been content even with a point against a robust, well-organised Bilbao side.

But after edging out Getafe on Thursday, through a Ramos spot-kick, Madrid repeated the trick at San Mames, their captain's nerve from the spot combining with a gutsy display to grind out a pivotal win.

Ramos was perhaps fortunate not to concede a penalty himself when, off the ball, he seemed to slip and tread on the foot of Raul Garcia, but Madrid escaped.

Instead, the defender's 10th goal of the season, the best tally of his career, gave Madrid their third 1-0 win in a row, as well as a fourth consecutive clean sheet.

"It's a massive win," said Ramos. "We knew today was going to be one of the biggest games that we have left. It's always a difficult game away at Bilbao and we saw it like that. We're happy with another crucial three points that put more pressure on Barcelona."

Ramos said he is always confident on penalties.

"In those moments of doubt that's when I feel most comfortable. I wanted to take the responsibility," he said. "But if I wanted individual recognition I would play tennis."

"We're not going to win it thanks to the referees," said Ramos. "People have to look at themselves and be critical of their own performances. Based on the points, it seems we're doing well at the moment."

Madrid were without key players, with Raphael Varane nursing a neck injury and Eden Hazard out with pain in his ankle.

Eder Militao replaced Varane while Marco Asensio made his first start in 14 months up front.

There were chances at both ends in the first half and Bilbao had the best of them. Williams twice went close but was denied by a block by Marcelo and then a superb tackle by Militao while Raul Garcia's header was pushed out by Thibaut Courtois.

Karim Benzema would have had a tap-in had Dani Carvajal executed a cushioned pass across the box but his touch was too high.

Asensio's free-kick had created the chance and he swung in two more brilliant crosses before half-time, only for Rodrygo and Benzema to miss with their heads.

The second half was tighter as both teams slowed in the heat and a more cautious contest seemed to suit Madrid, whose moment came in the 73rd minute.

Marcelo was rewarded for a lung-busting run into the box, where he reached the ball just ahead of Dani Garcia, who twisted his body into the left-back and bundled him over.

Referee Jose Gonzalez consulted VAR and awarded the penalty, which Ramos whipped into the bottom corner.

Bilbao looked tired and never really threatened an equaliser but could have been gifted one had Ramos been penalised for the clumsy collision with Raul Garcia. Ramos survived and Madrid held on.