Portuguese football season to restart in May: PM

The Portuguese football season can restart behind closed doors on the last weekend of May, the country's prime minister said Thursday while announcing plans to relax the coronavirus lockdown.

The country's top flight Primeira Liga and the final of the Portuguese Cup are the "only exception" to a ruling that has kept all other professional sport suspended, Antonio Costa told reporters.

Costa added that a restart to the season, which has been suspended since mid-March, is subject to approval by health authorities and the selection of stadiums that can satisfy requirements.

With 10 matches remaining Porto are top of the league, one point ahead of reigning champions Benfica.

Braga and Sporting Lisbon are 13 and 15 points back respectively.

Porto and Benfica are also set to take each other on in the Portuguese Cup final, which is yet to be rescheduled after being postponed from its original date of May 24.

The suspension to the season has hit Portuguese football's finances hard with one of the league's main sponsors, media and telecoms group Altice, trying to suspend its payments to first and second division clubs.

Sporting's fragile financial situation has led to the club cutting player pay by 40 percent and putting almost all of its staff on a partial unemployment scheme since mid-April.

We live in a world where facts and fiction get blurred
In times of uncertainty you need journalism you can trust. For only R75 per month, you have access to a world of in-depth analyses, investigative journalism, top opinions and a range of features. Journalism strengthens democracy. Invest in the future today.
Subscribe to News24
Related Links
Lyon 'reserve right' to appeal no European qualification
HAVE A READ | Today's top 10 Sport24 articles
Liverpool mayor fears 'farcical' scenes if Premier League resumes
Next on Sport24
PSG president Nasser Al-Khelaifi acquitted in World Cup TV rights corruption trial - court 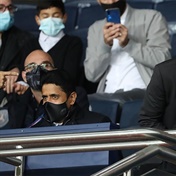