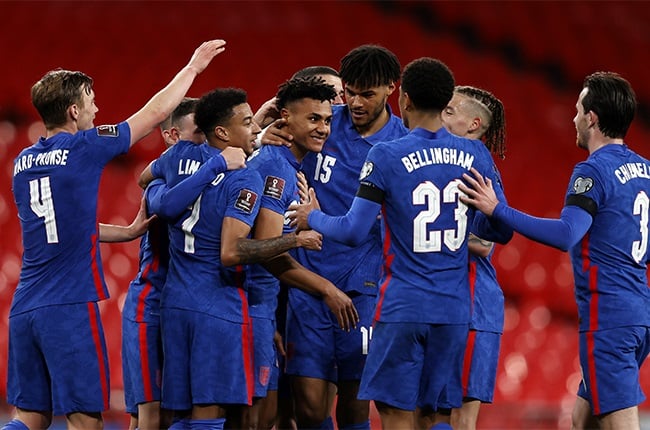 The 25-year-old has enjoyed a meteoric rise since then, joining Brentford in 2017 before moving to Villa last year after finishing as top scorer in the Championship.

He has scored 12 times in his first campaign with the Premier League club, earning a maiden England call-up and a debut against minnows San Marino at Wembley.

With England four goals up thanks to Dominic Calvert-Lewin's brace, a first international goal for James Ward-Prowse and Raheem Sterling's strike, Watkins came on after 63 minutes.

Set up by Phil Foden's pass, Watkins scored with his first shot in an England shirt with a cool low finish.

Watkins' beaming face and the jubilant celebrations of his team-mates underlined what a special moment it was for a player who has had to fight his way to the top.

England boss Southgate recognised the significance of the moment, saying: "The first thing you saw was the reaction from the rest of the team. That shows you how together they are. They know what it means for him.

"He's settled in really quickly with the group. He's a really humble boy and it was nice to be able to give him half an hour or so. For him to get a goal is fairytale isn't it?"

Watkins once spent half a season on loan at non-league Weston-Super-Mare, making him all the more appreciative of his instant success with England.

"It's unbelievable, it's what I've dreamt about to be honest. I'm speechless," he said.

"It's been a good journey. I just feel honoured that I can come out here and pull on the shirt and get the chance to play with the players I'm playing with and even score on my debut. I couldn't write it, I'm over the moon."

Watkins was the stand-out story on a comfortable night for England, who would have won by far more if not for a fine display from San Marino keeper Elia Benedettini.

The San Marino match, Sunday's trip to Albania and Poland's visit to Wembley on Wednesday are all World Cup qualifiers, but they serve as vital warm-ups for the delayed Euro 2020, which starts in June.

Southgate's 50th game as England boss won't linger long in the memory given the paucity of the opposition, but he still learnt valuable lessons.

Calvert-Lewin's predatory finishes were instructive, while Jesse Lingard, Mason Mount and Ward-Prowse all caught the eye in midfield.

"I was really pleased with not only the way we moved the ball quickly and the interchange of positions, but the way we pressed when we lost the ball highlighted the mentality of the team for the whole 90 minutes," Southgate said.

"Mason in the first half was excellent, set the tone. Good to see Jesse look like he's enjoying his football again, so I thought there were a lot of good things.

"Of course it's an opponent we should beat but I thought they went about their job really well."

Mount picked out Ben Chilwell's run into the penalty area and the left-back's pass was confidently converted by Ward-Prowse in the 14th minute.

Teed up by the influential Mount in the 31st minute, Sterling got the third when he weaved into the six-yard box for a shot that deflected in off Dante Carlos Rossi.

England were well on top but they settled for just two more goals after the break.

In the 53rd minute, Lingard's cross was swept home by Calvert-Lewin and with seven minutes left Watkins drilled into the far corner.

We live in a world where facts and fiction get blurred
In times of uncertainty you need journalism you can trust. For only R75 per month, you have access to a world of in-depth analyses, investigative journalism, top opinions and a range of features. Journalism strengthens democracy. Invest in the future today.
Subscribe to News24
Next on Sport24
Veteran Modric to lead Croatia at Euro 2020