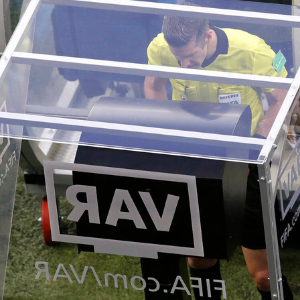 Cape Town - The upcoming 2019/20 La Liga edition will see the return of the Video Assistance Referee (or VAR for short), implemented to provide technical assistance to referees.

For 90 minutes, a team of three professional LaLiga Santander referees operate in a room called the Video Operation Room, where they receive the television signal from different angles and cameras. The VAR referees are connected to the main referee via radio which they use to communicate their decisions.

When is VAR used?

This team of professionals is called in when a decision is too tight to call on the spot which means that the VAR system is used sparingly. Only referred to when the stakes are high, FIFA considers the use of VAR appropriate only in a handful of situations that are match-changing incidents such as:

1. When a goal is scored

- Determining if a penalty should be given

- Determining if an action deserves a red card

How successful has it been?

The big question on everyone’s minds is whether or not the VAR has had a positive impact on the league. Despite its fair share of controversy, the statistics on LaLiga’s VAR experiment make for interesting reading. During the 2018/19 season, there were:

According to LaLiga’s Technical Committee of Referees (CTA), VAR had also corrected close to 50 errors made by referees with regards to penalty kicks, although 25 other decisions remained unchanged. Furthermore, the VAR was also involved in:

- The evaluation of 4293 incidents during the whole season

Most importantly, the VAR system has improved what referees call the “correct decision rate” from 91.50% to 96.92%. As a consequence of this improvement, players are acknowledging that better decisions are being made. This is reflected in the fact that in-game protests fell by 17.3% in the 2018/19 season.

While a complaint is rarely heard from the side that has been favoured, the VAR has contributed to more justice. Looking at the listed facts, statistics and the impact technology continues to have in football one main objective of VAR is to simply decrease the amount of errors and promote fair play. Hence, LaLiga referees and video referees will keep working hard in the 2019/20 season.

We live in a world where facts and fiction get blurred
In times of uncertainty you need journalism you can trust. For 14 free days, you can have access to a world of in-depth analyses, investigative journalism, top opinions and a range of features. Journalism strengthens democracy. Invest in the future today. Thereafter you will be billed R75 per month. You can cancel anytime and if you cancel within 14 days you won't be billed.
Subscribe to News24
Related Links
Ronaldo explains what makes him the best over rival Messi
Almiron enjoying new role at Newcastle
United striker Rashford in line for sizeable bonus
Next on Sport24
EPL TV | The latest videos from the English Premier League