The playmaker has been the centre of transfer rumours since handing in a transfer request earlier this year.

City have since emerged as his most likely destination, although manager Pep Guardiola wants to see Messi remain at Barca.

Rivaldo has now revealed his take on the ongoing situation in Spain.

Writing on his Betfair Column, the World Cup winner said: “Reaching an agreement to renew Messi's contract is going to be tough with a reduced margin to increase his salary.

"Of course, Messi will have better offers from other clubs, and was already trying to leave the club by the end of last season. I can’t see how our board will convince him to move back on that decision.

"In my opinion, only winning the Champions League or La Liga this season or having [Ronald] Koeman getting the team playing beautiful football can convince Messi to reconsider his options.

"Unfortunately, I'm afraid this will be his last season with the club."

Messi was nearing a move to England during the summer transfer window. This was eventually stopped as Barca revealed that City would have to pay his massive £629 million release clause first.

It was previously thought that the 33-year-old could end his contract a year early and move to a new club.

One big sticking point for City is their manager’s determination to see Messi remain at the Nou Camp.

Guardiola said about the matter recently: “Lionel Messi is a Barcelona player. If you have my opinion, as a person, I have huge gratitude for Barcelona and what they have done for me. In the academy, as a player and a manager, they gave me absolutely everything.

"I want him to finish his career there. That is what I want. I said it a thousand times. As a Barcelona fan I want Leo to finish there."

However, Guardiola went on to say that he wasn't sure what would happen to Messi if he does decide to leave.

We live in a world where facts and fiction get blurred
In times of uncertainty you need journalism you can trust. For only R75 per month, you have access to a world of in-depth analyses, investigative journalism, top opinions and a range of features. Journalism strengthens democracy. Invest in the future today.
Subscribe to News24
Related Links
Kaizer Chiefs will go big in 2021 transfer market, reckons SuperSport United boss
'Maybe Mourinho is a doctor' suggests Guardiola ahead showdown against Spurs
Brendan Rodgers not thinking of emulating Leicester's league triumph of 4 years ago
Next on Sport24
Diego Maradona, a divine talent with more than a touch of the devil 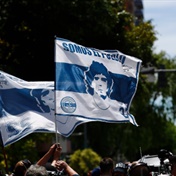