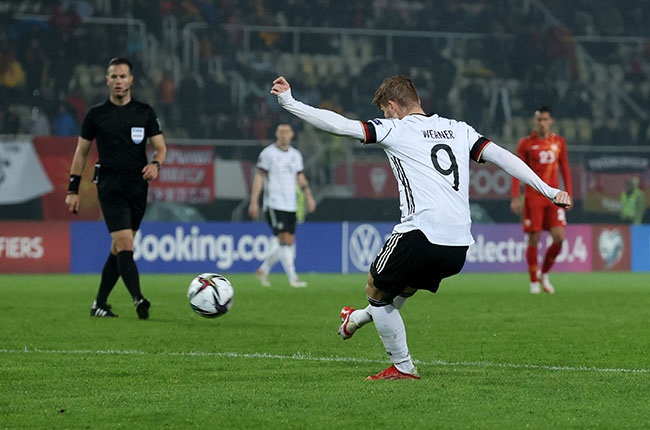 Germany continued their spotless record under new coach Hansi Flick and secured qualification for the 2022 World Cup as Chelsea striker Timo Werner scored twice in a 4-0 rout of North Macedonia on Monday.

Just months after they slumped to a shock 2-1 defeat to the same opponent on home soil, Germany cruised to a dominant win in Skopje to increase their lead at the top of Group J to eight points and secure their berth at next year's tournament in Qatar.

Werner's Chelsea team-mate Kai Havertz also got on the scoresheet and Jamal Musiala scored his first international goal as Germany made it five wins out of five under Flick, who took over from Joachim Loew after Euro 2020.

The 56-year-old coach said 2014 World Cup winners Germany still had "a long way to go", but insisted his team could compete with the best in the world.

"Our players have the quality to rival France, Italy and Belgium. I am very optimistic," he said.

Midfielder Leon Goretzka also backed Flick to take Germany back to the top of the world game after failing to make it past the first two rounds at both of their last two major tournament appearances.

"We still need to improve to get back to the top, but there are few people better placed than Hansi to do that," he told RTL.

Goal-scorer Werner added that Flick's faith in him had helped him to shrug off growing criticism of his form in recent months.

"When a coach likes you and trusts you, then it helps every striker, especially me. I need that trust, and Flick gives that to me 100 percent," he said.

Havertz finally opened the scoring just after the break, slotting into an empty net after a lightning counter-attack.

Werner doubled the lead with a sharp volley on 70 minutes, before curling a third into the bottom corner a few minutes later.

Seven minutes from time and shortly after coming on to replace Werner, Musiala fired a low shot past Dimitrievski.

"Jamal is very cool in front of goal for a player his age," said Flick.

Get the newsletter
Voting Booth
Would you be keen to see the Springboks join the Six Nations?
Please select an option Oops! Something went wrong, please try again later.
Yes! The Northern Hemisphere is the future.
52% - 2294 votes
No! The Rugby Championship is still the pinnacle.
48% - 2134 votes
Previous Results
Showmax
The story of a legend: Sir Alex Ferguson