Cape Town - Itumeleng Khune is likely to return to the substitutes bench for Kaizer Chiefs' league clash against Maritzburg United this weekend, according to coach Ernst Middendorp.

The 32-year-old Khune made his return to Amakhosi's starting line-up in their 1-0 victory over Royal Eagles in the Nedbank Cup on Saturday after spending five months on the sidelines.

Middendorp said after the game though that Daniel Akepyi, who has been Chiefs' number one shot-stopper during Khune's absence, will return in goals for the log leaders game against the Team of Choice on Saturday.

The German mentor said after Saturday's victory: "Daniel has played a very solid run of games in the league.

"He's very qualified and kept us in the game very often, and therefore, at the moment, I would say probably Daniel next week and if the Cup competition is coming a week later, I don't have a problem making a selection with Itu or without Daniel.

"We don't talk too much about it. We just make the decision and that's it."

Middendorp did not want to go into much detail when asked what it will take for Khune to reclaim the number one position.

"At the moment, it's best to not think too much about it. The game was successful," Middendorp said.

"Now I sleep, then we'll go back to training and prepare ourselves for the next game.

"We chatted with the goalkeeping department. They have a very clear understanding of what's possible. So, let's wait and see actually. I don't want to make a decision now." 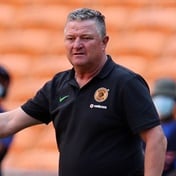